So if you are a multi-rotor pilot and have wanted to take video at some stage you will have come across the dreaded JELLO effect that high frequency vibrations cause in today's action cams.

If you have not then you are very very luck. I have over the last 12 months tried so many different options and variations I have lost count. I was never happy and was always changing setups and trying different things.  Then to complicate things I threw a gimbal into the mix.

The most annoying aspect to this was that I didn't have a "goto" camera platform that I knew would be consistent in taking good video. This was evident in my time in Wellington when I was only able to get some good shots and others were impacted due to vibration and a gimbal motor dying.


So with my new toy the 3D printer I set out correct this:

Goals I wanted to achieve


So the first thing I did was decide that I wanted to do a dirty / clean plate design. I had a mixed bag of rubber anti vibration balls from Hobbyking that I could use.

The only non 3D printed parts were 8MM OD fibreglass tubes from crab landing gear. You can get them from HobbyKing for 80c for a 330mm length and the rubber vibration balls, and a few 3mm nuts and bolts.

My design is very simple. The 8mm tubes are used as the rails and all other components slide onto the tubes.

Here is one of the very early designs, the 8mm tubes are a friction fit in the holes as there is no real force on them. 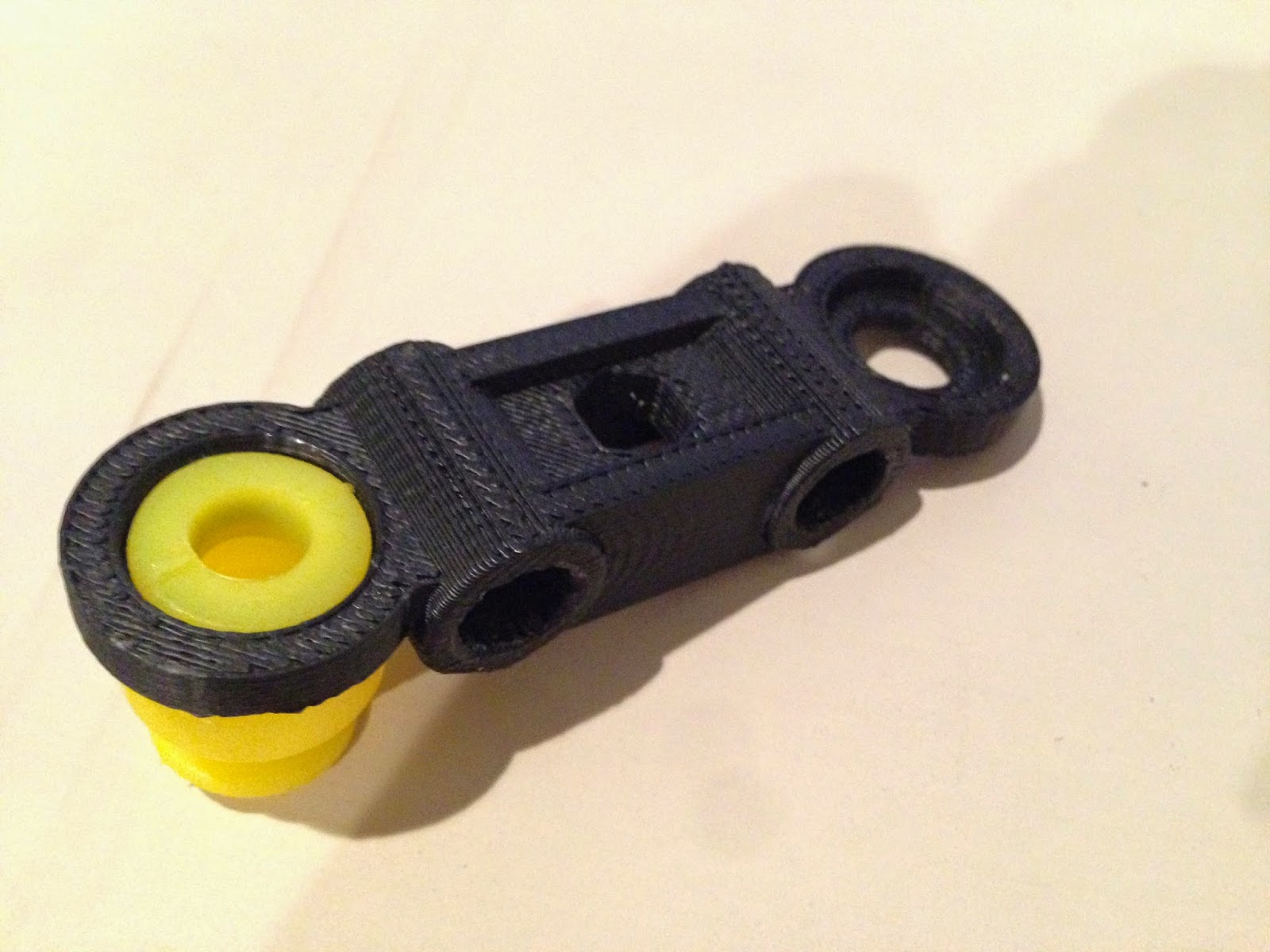 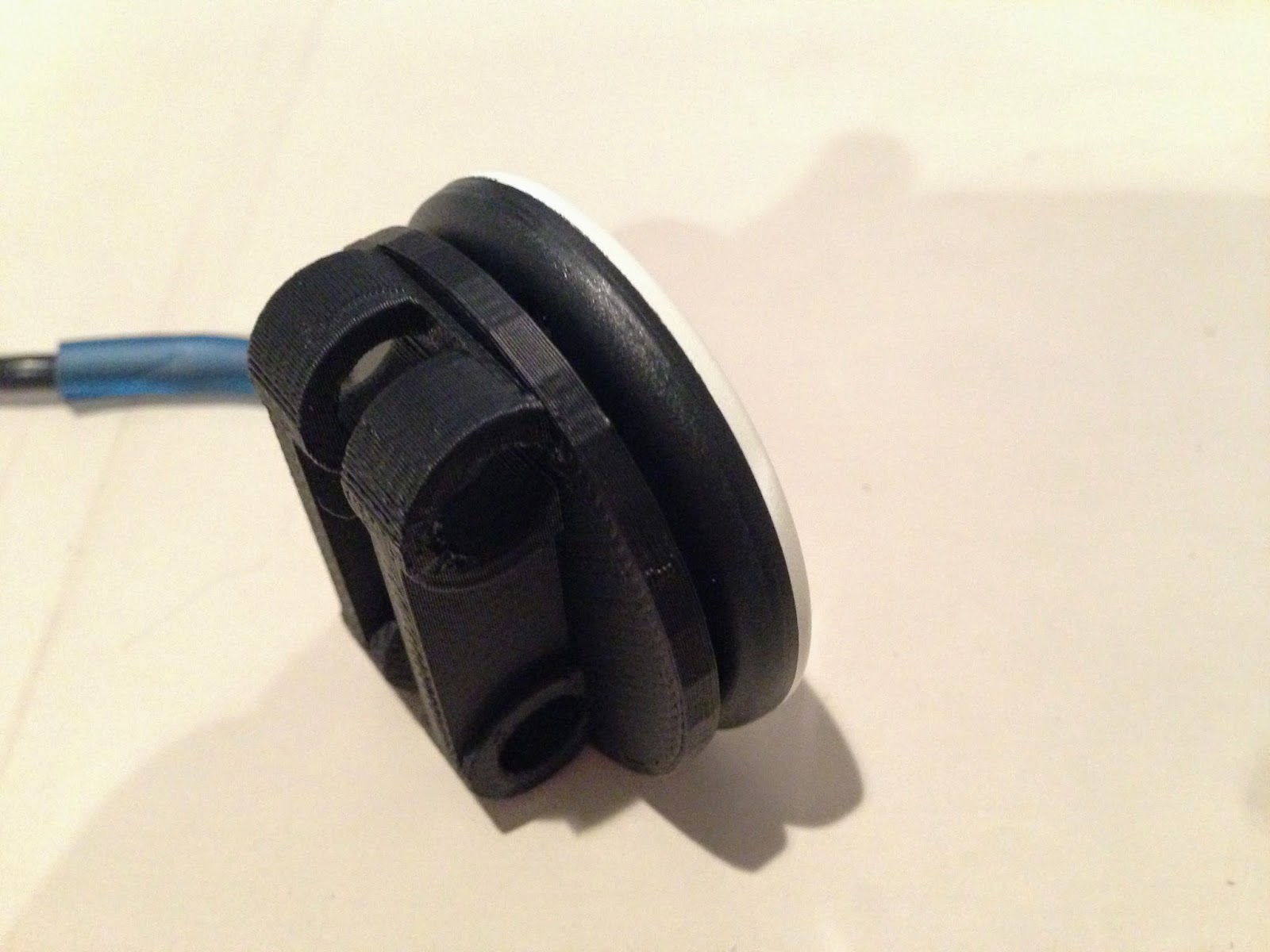 After an initial test with the GoPro and Mobius using 80g vibration balls I had success. Nice clean jello free video, from both cameras. The Gopro produced the better picture. But it proved that I was on the right track.

Here is some video from that first tests.

After successful tests I moved to the next stage which was to design my own gimbal. I made the gimbal specifically for the GoPro hero3. One of my concerns was to make sure I was able to protect the GoPro as best I could as I cant afford to replace it. So I made a lens cap that extended past the lens and then designed a case that completely surrounded the GoPro as well having the motor mount for the gimbal motor built in. The motor mount was designed to have the ability to move the motor up/down to allow CG adjustment.

The GoPro case also had the gimbal IMU protected and built in. I crash a lot so wanted to make sure I could provide as much protection as possible.

I use Tinkercad to create the design. Here is the final design before printing. Once the GoPro is in the case its secured with a zip-tie. The design still allows easy access to battery and SD / video out. 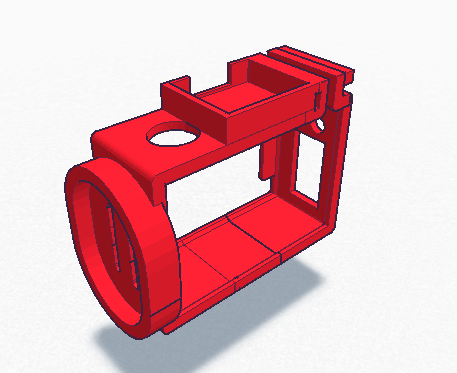 A few shots of the final 3D print with the camera case and the IMU. The lens cover is also on. 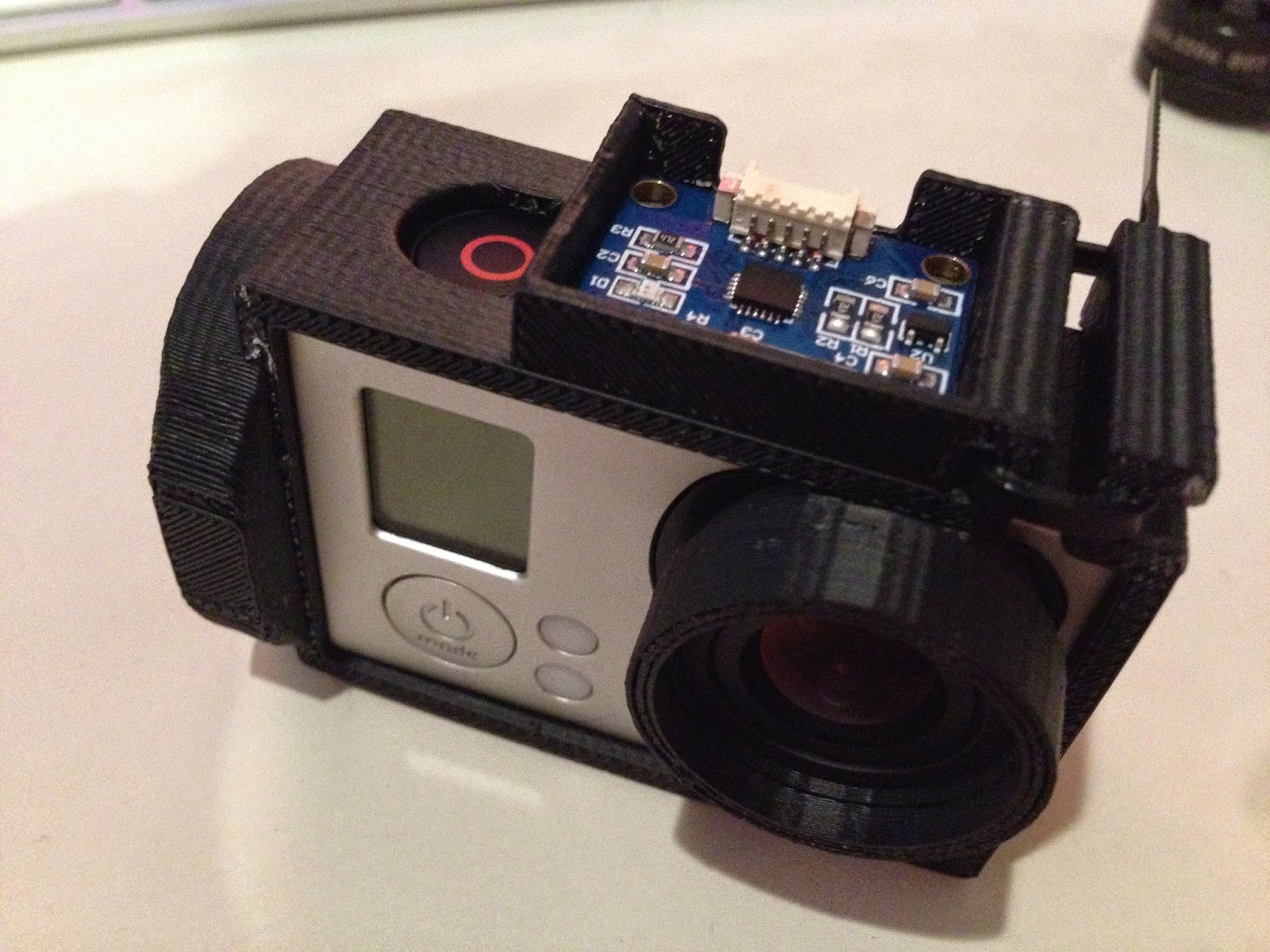 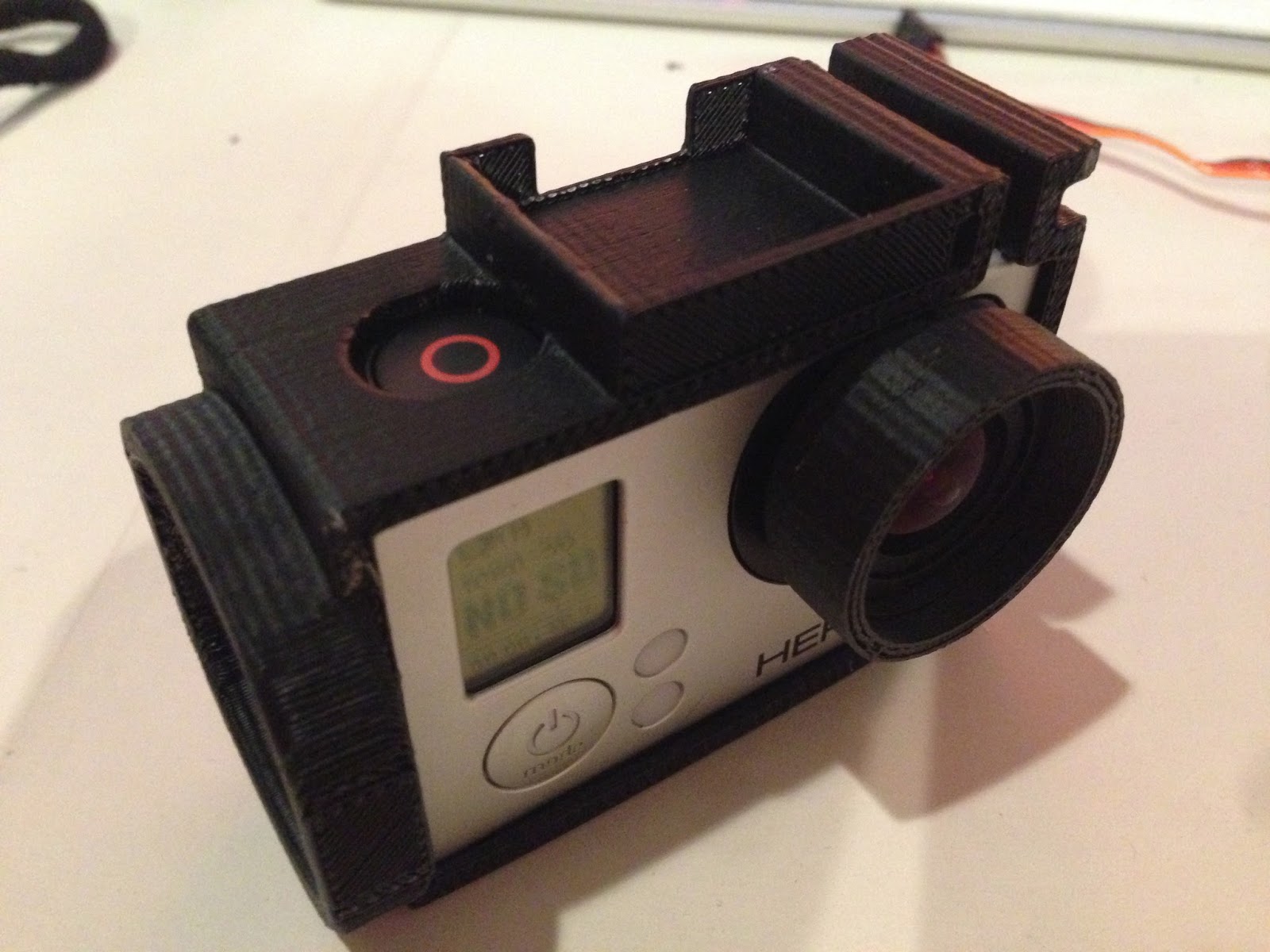 Next part to be designed was the gimbal arm. It took me a few attempts to get a strong design. But that's the beauty of 3D printing is that you can changes things very quickly if you make mistakes. I make plenty. 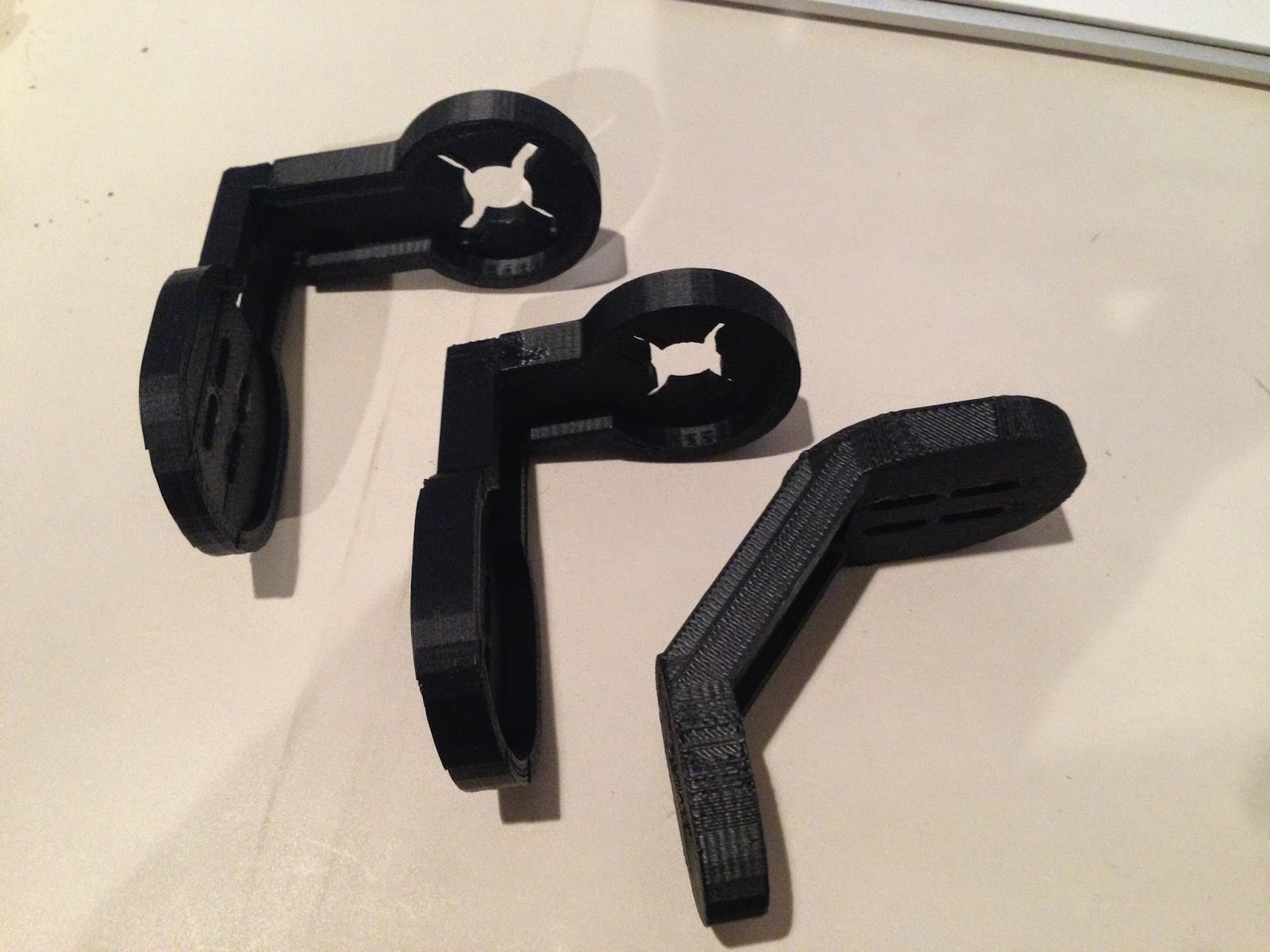 Next up was to design the gimbal controller case. the case would be the main mounting structure for both the motors and camera as well as the mounting to the multi-rotor. I had more than a few goes at getting this right. But eventually got a design I was happy with. Some of the challenge is getting something that was easy to print. 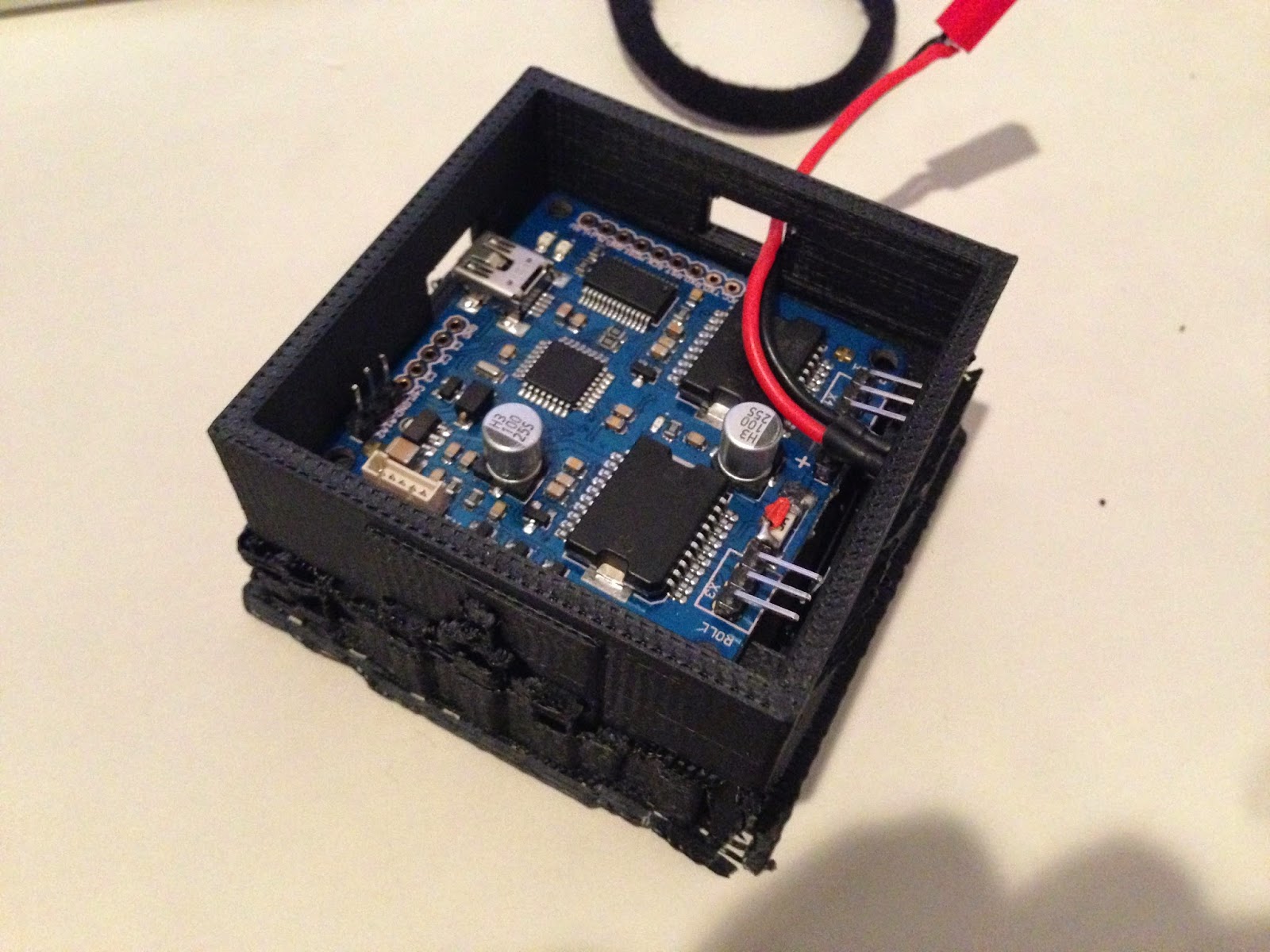 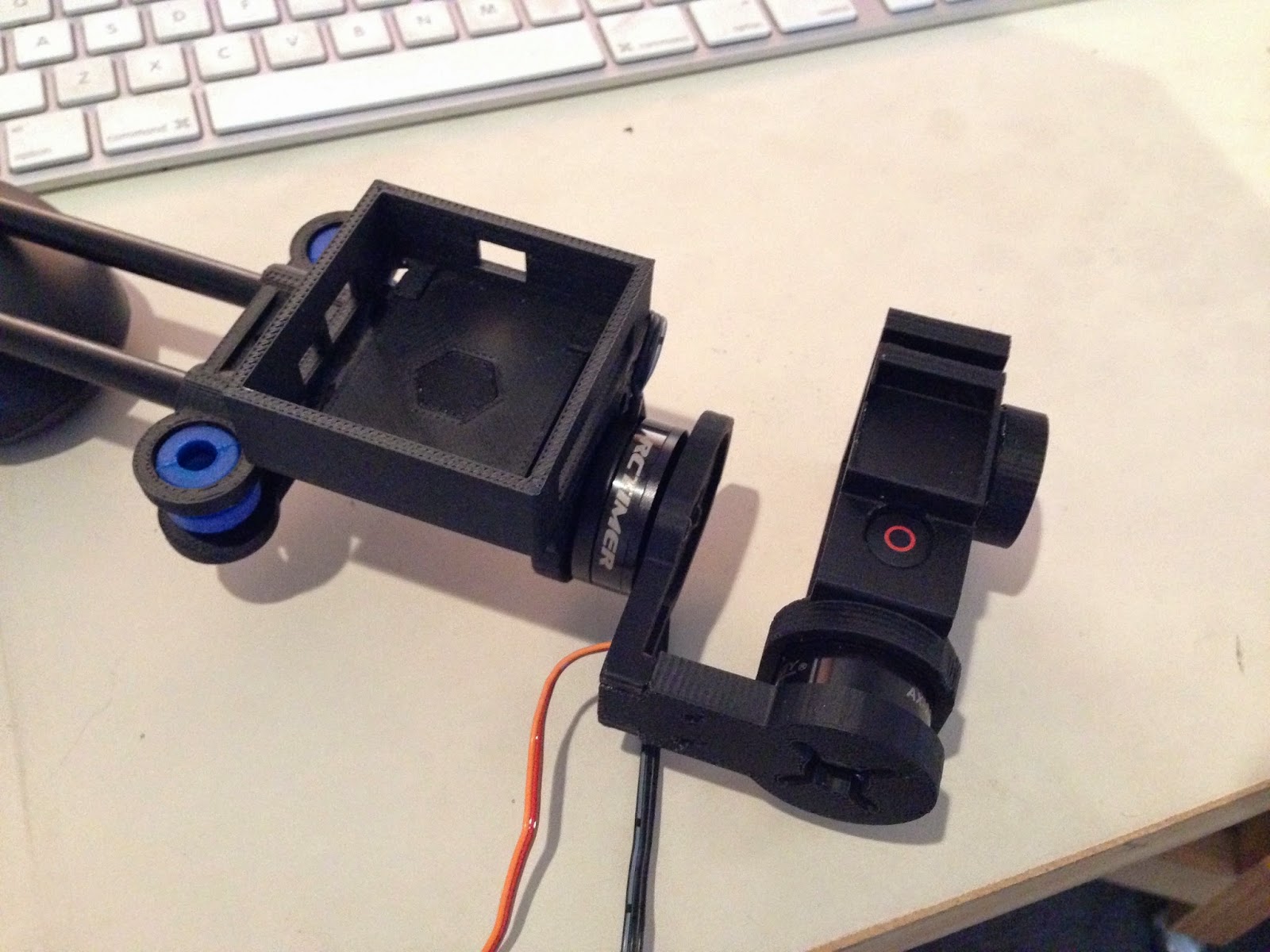 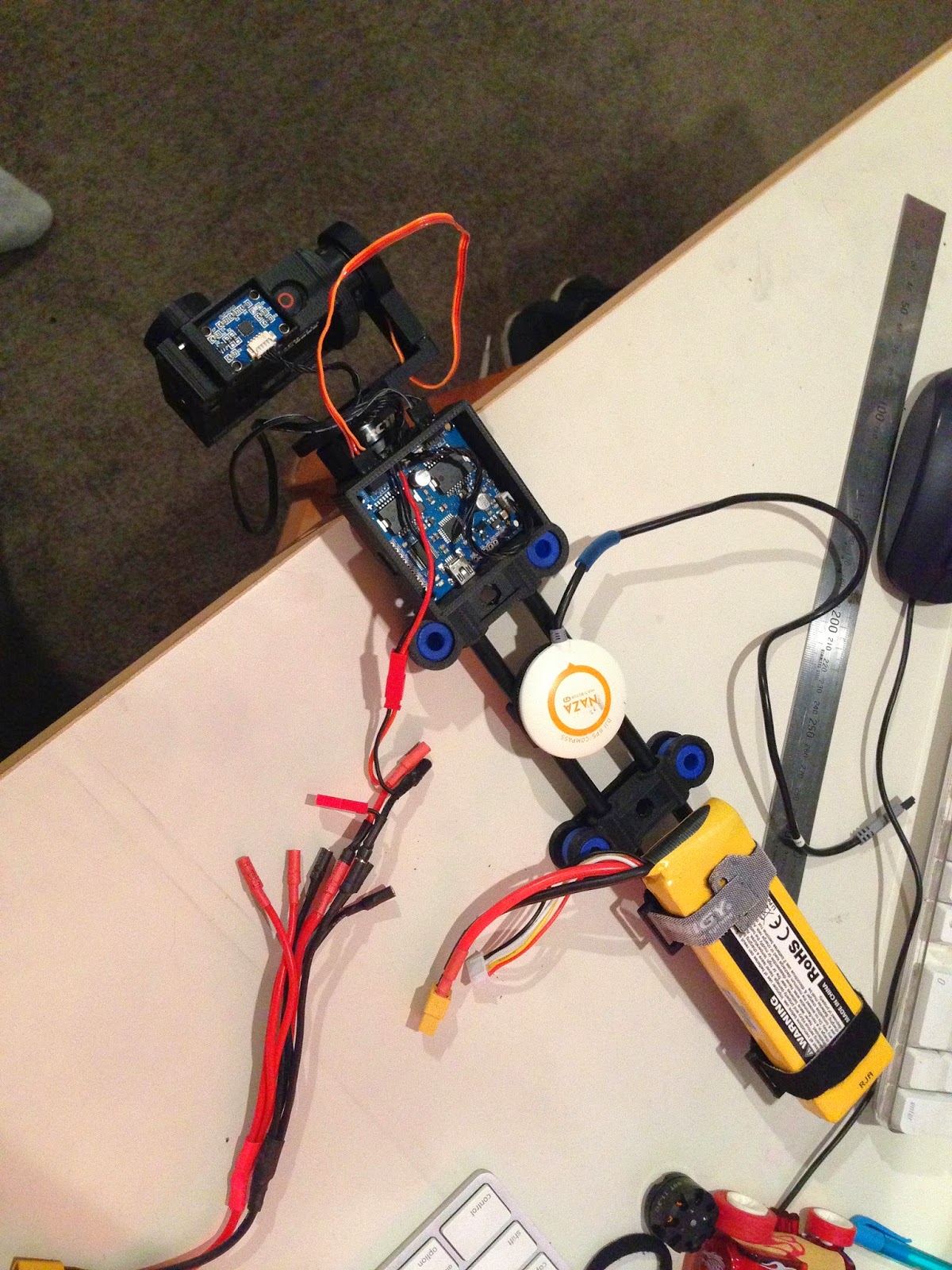 Full mock-up before getting fitted to the frame 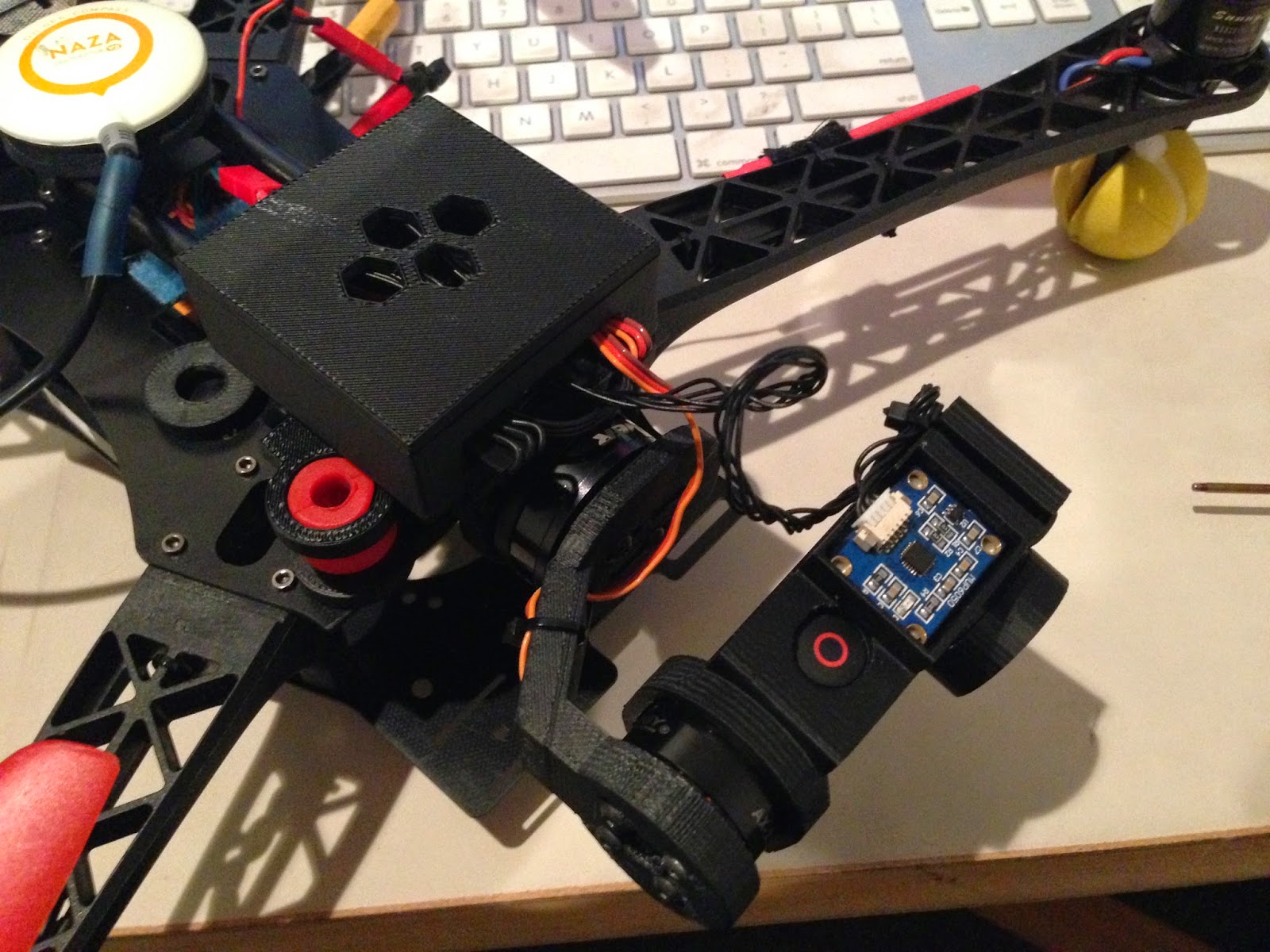 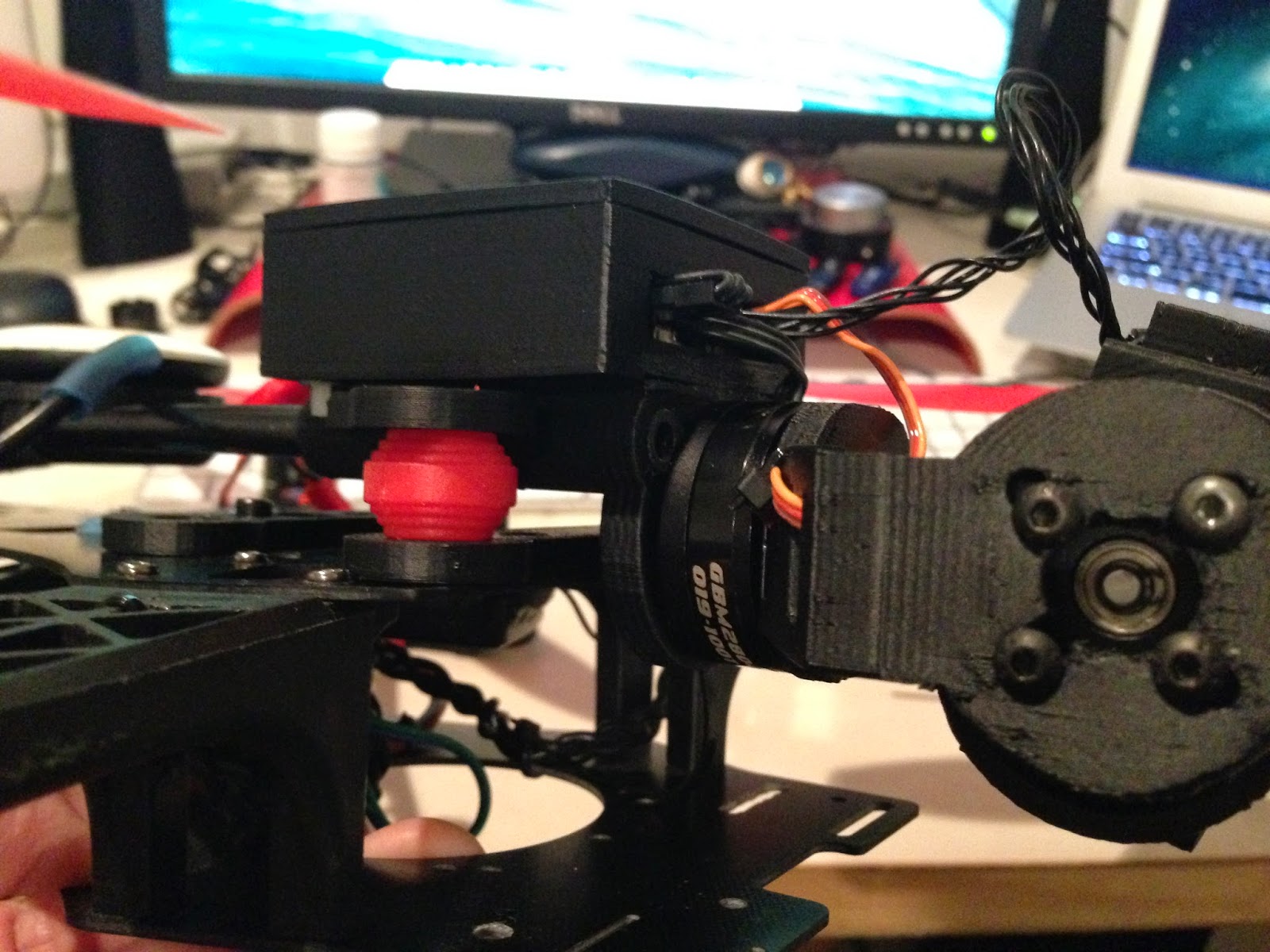 All mounted to the frame with final arm design. 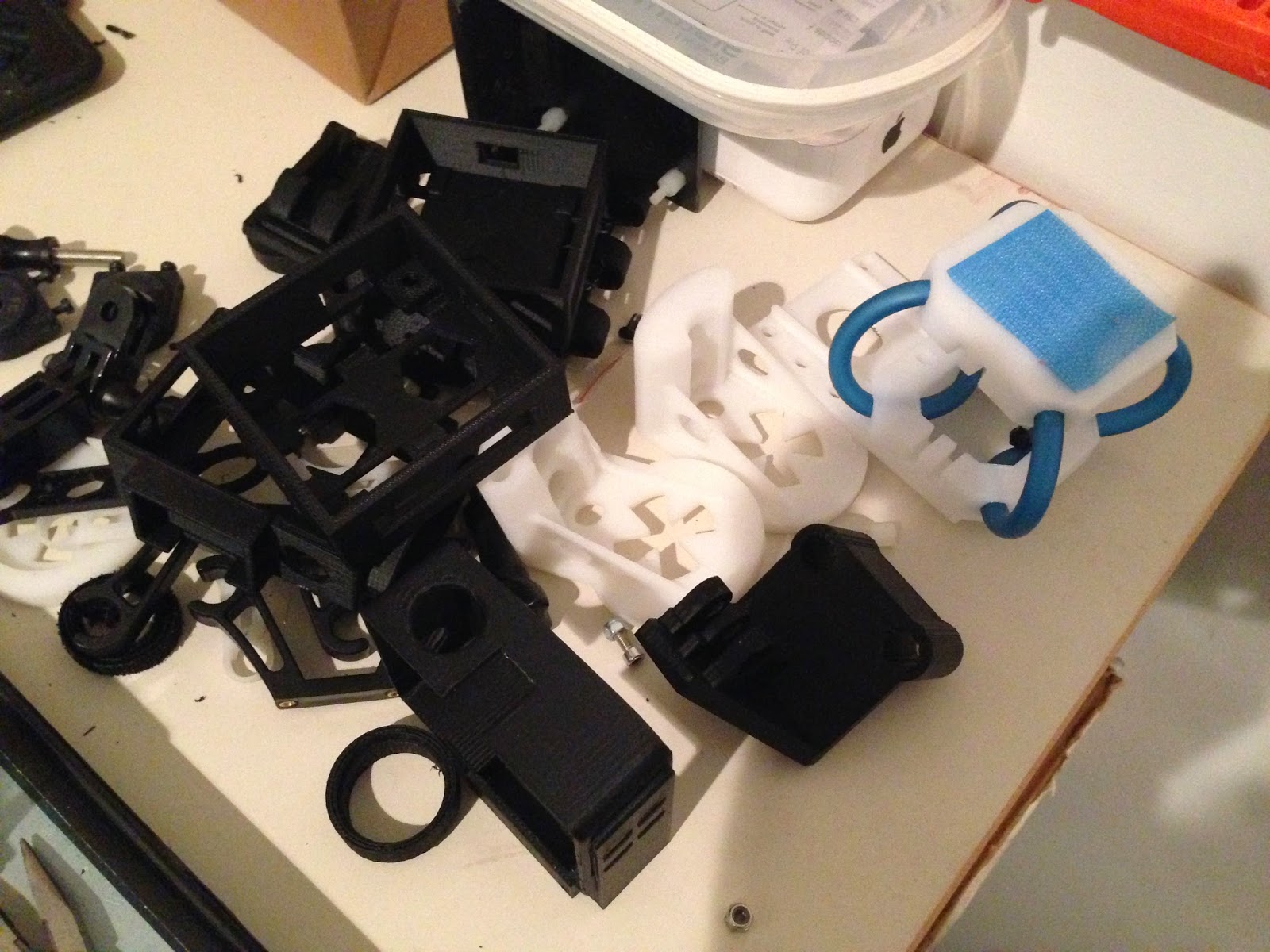 Did I mention I made a lot of mistakes and changed my design a lot through this process. This is the reject graveyard.

After more successful testing and a few redesigns I decided that I needed to get a decent frame to build my camera ship up on. I finally decided to go with a Hoverthings FLIP Gimbal Pro. I should have just got the Flip FPV as I discarded their clean plate system for mine.

I transferred the electronic over to the FLIP frame. 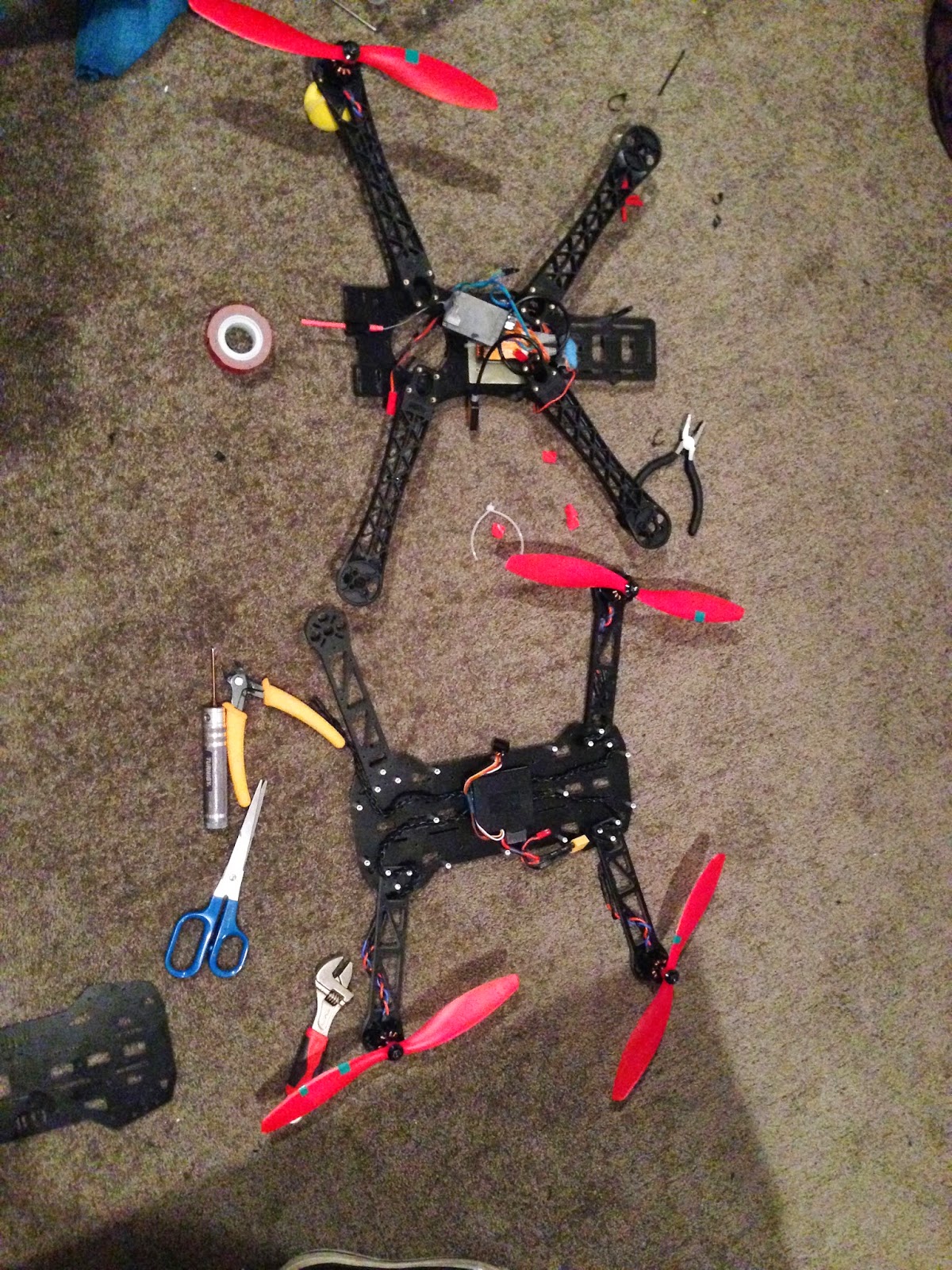 After a few design issues I decided to increase the width between the rails. So I had to redesign all the the mounts. 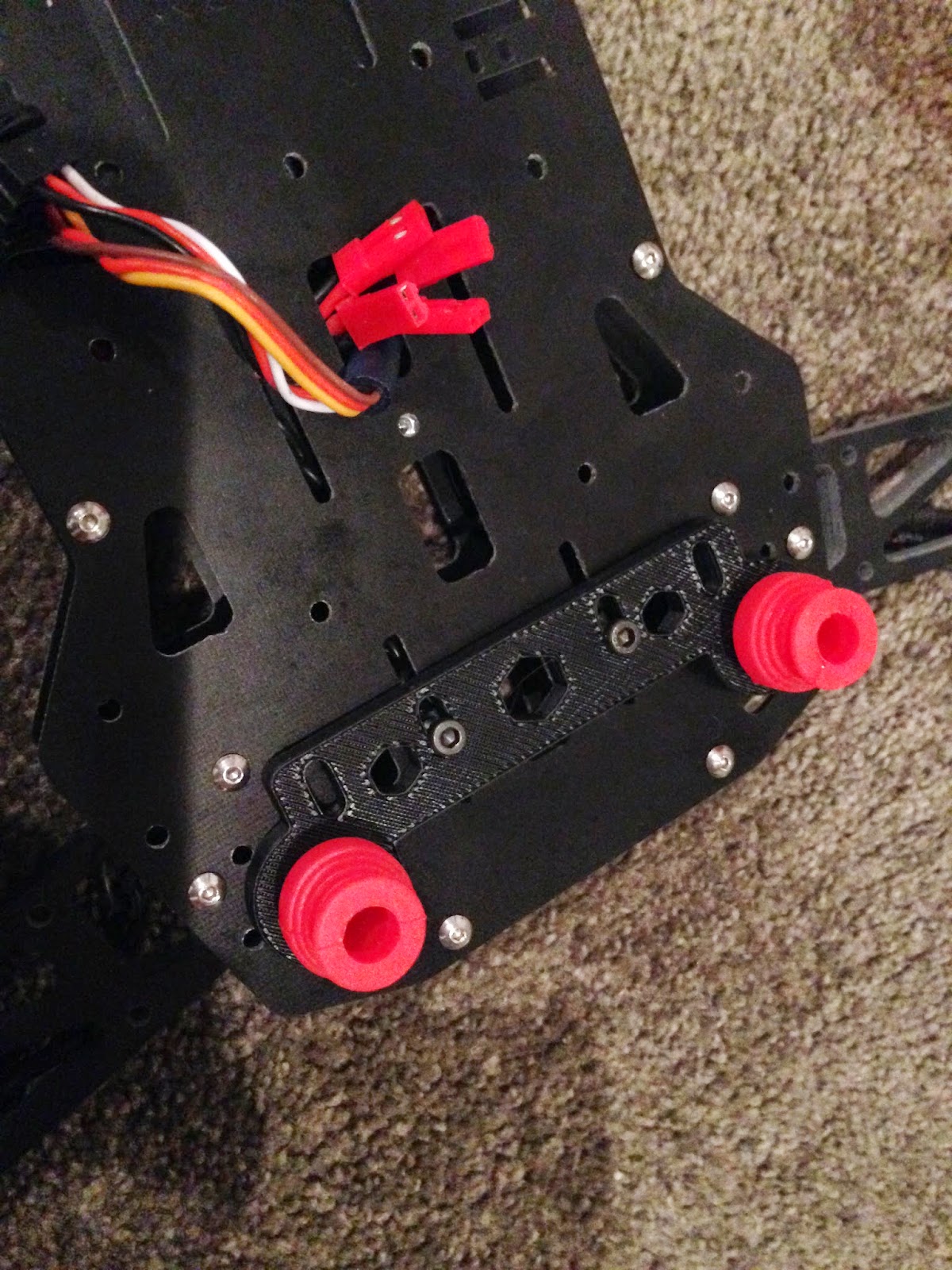 New wider base mounts on the FLIP frame. 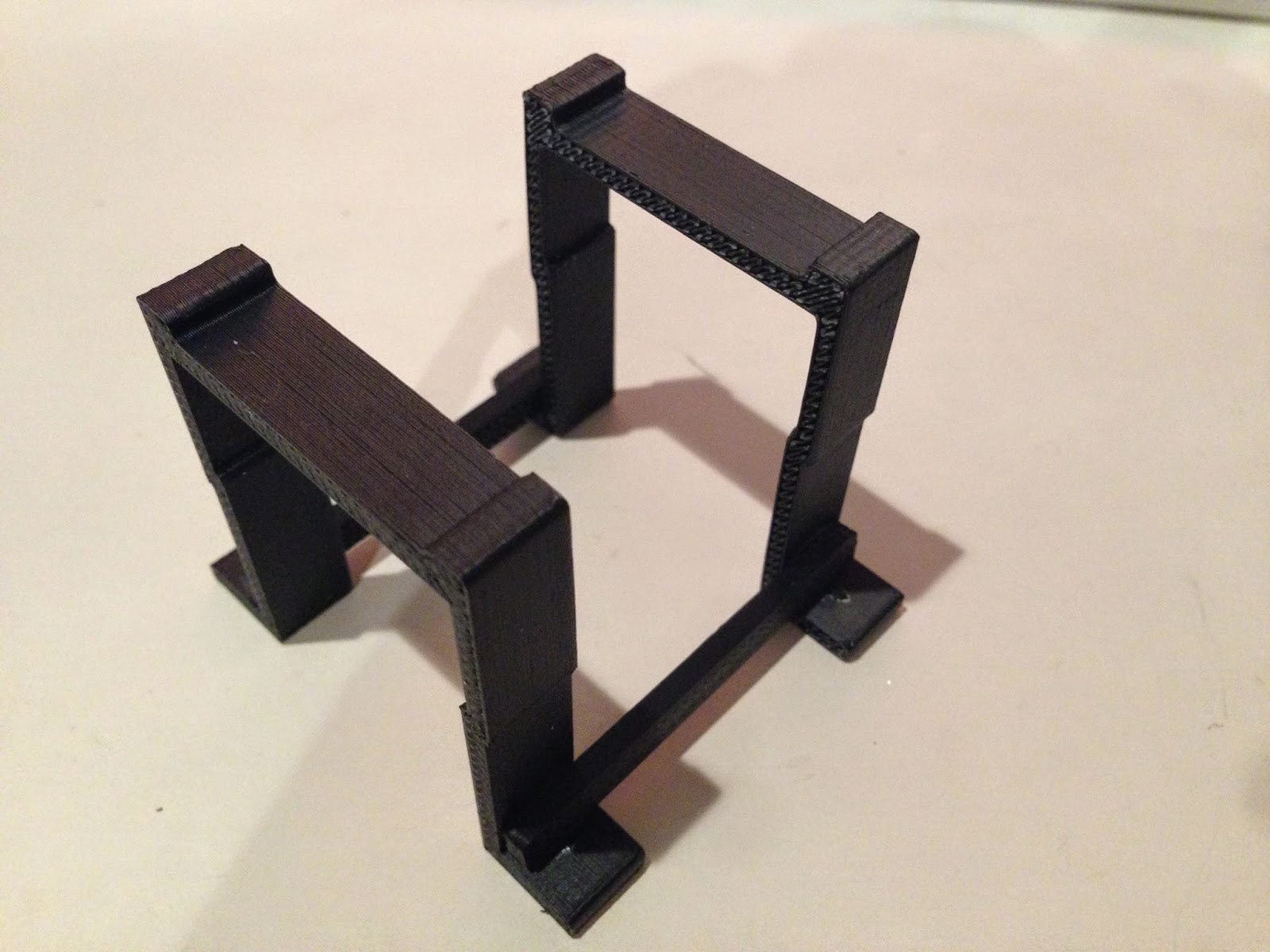 Mounting frame for the NAZA & Turnigy receiver. The Naza GPS sits on top. 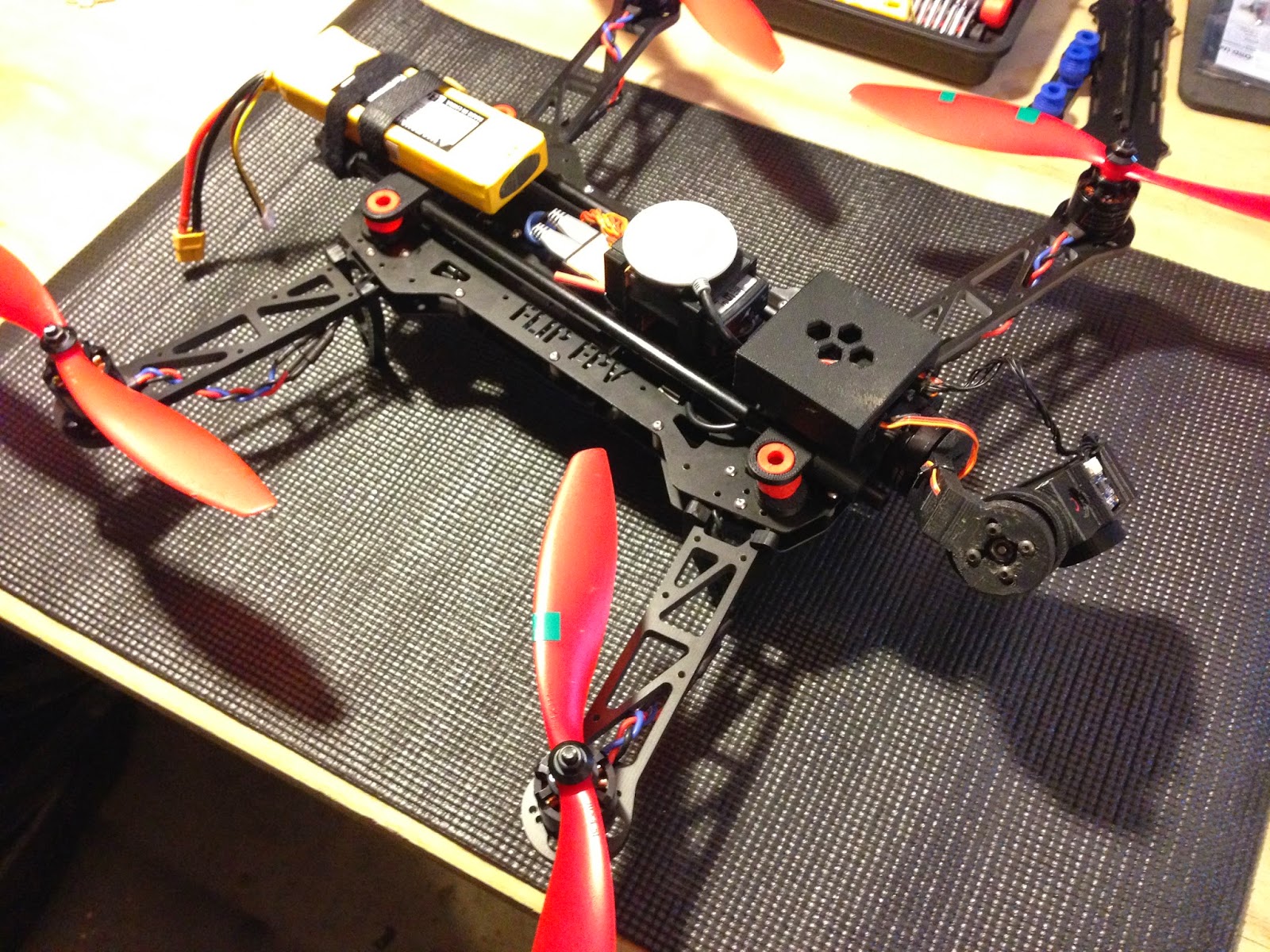 FLIP frame all finished. I am very happy with the frame it seems bulletproof. All the power system is nicely contained in the bottom frame. 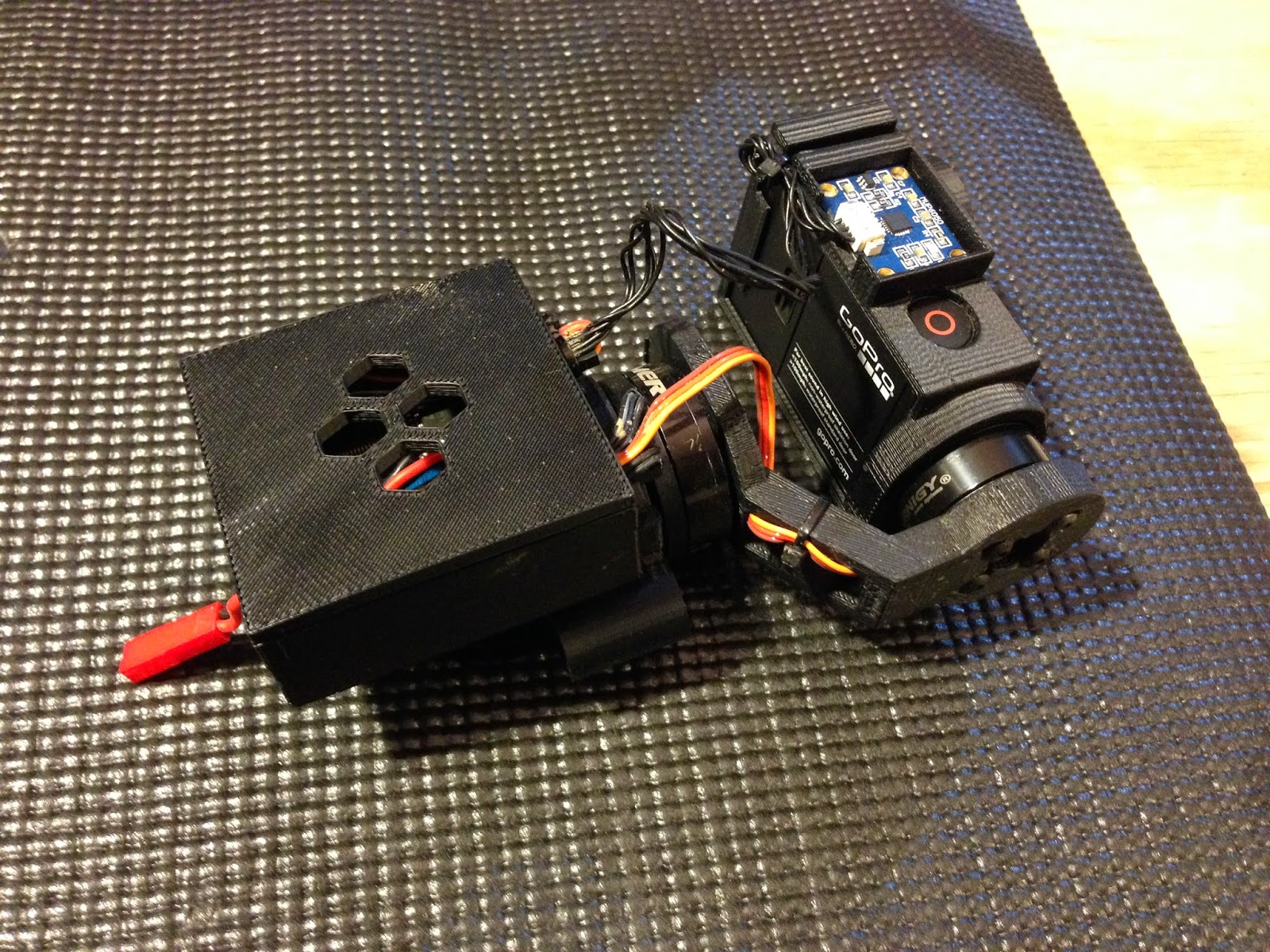 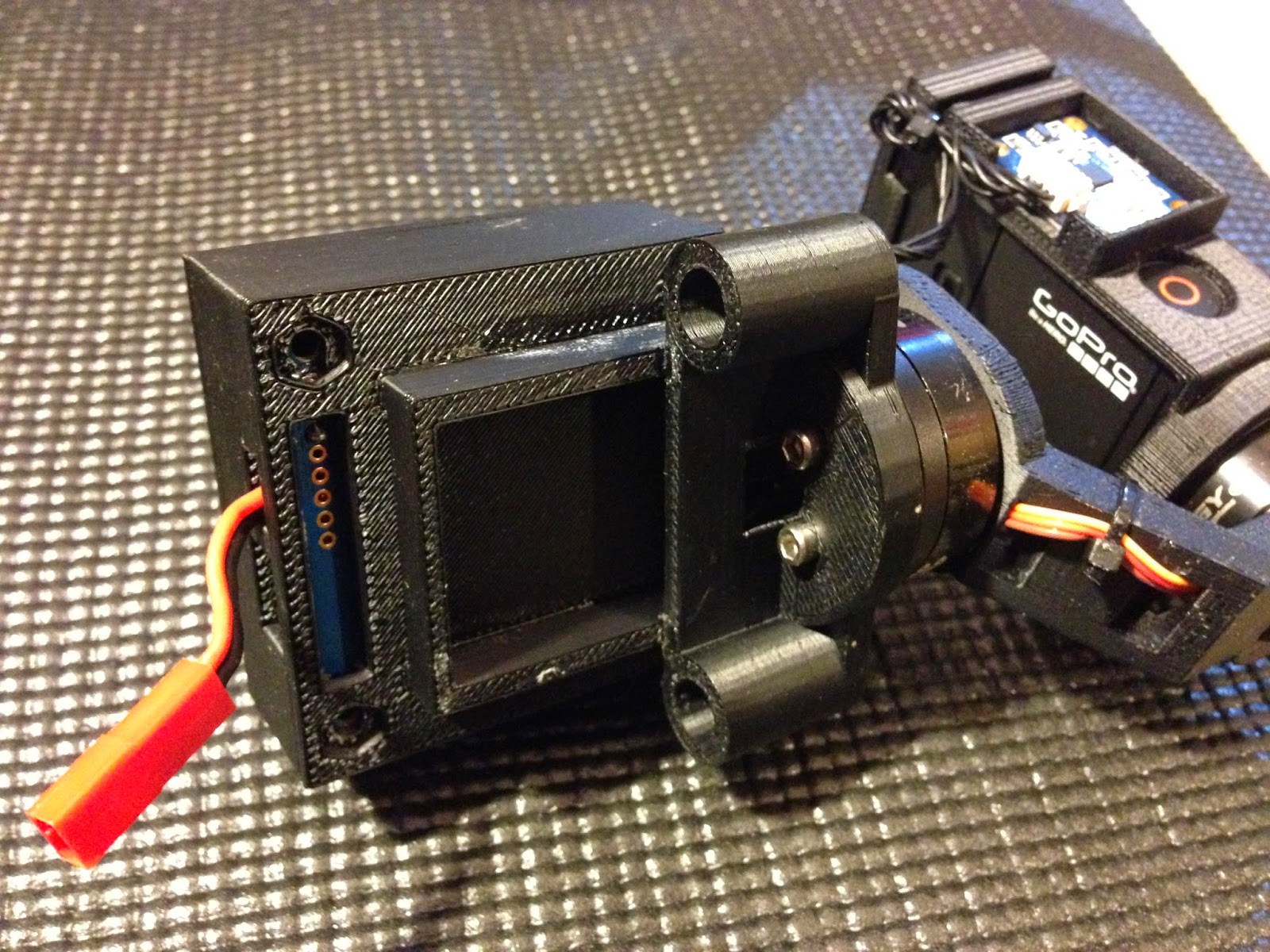 The final design for the gimbal module. Self contained and only need power connected to be up and running. 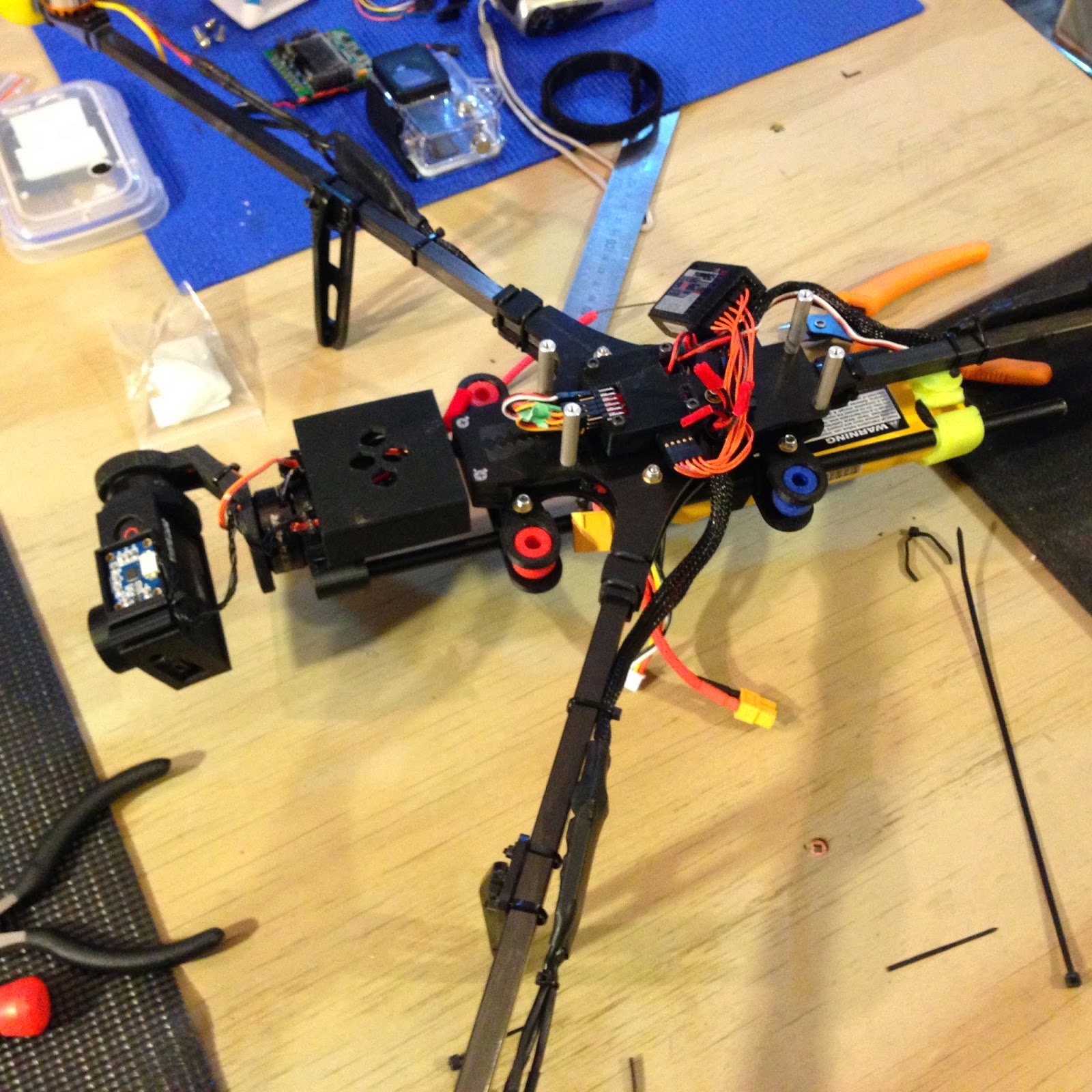 Testing fitting on the Titan tricopter, I designed a mounting system for this as well, I will cover that in another post. 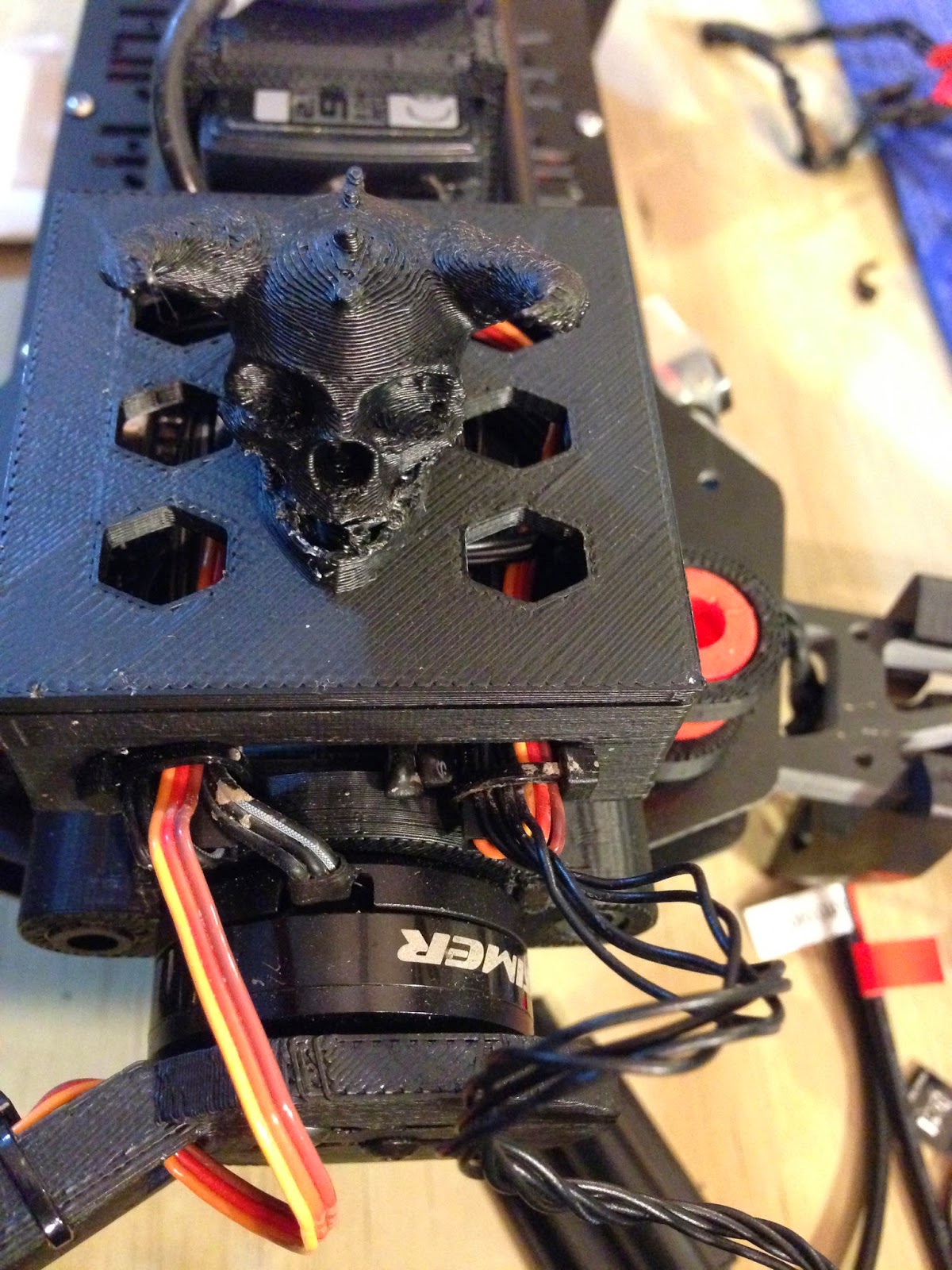 I had a bit of fun and made another gimbal controller lid with a skull on it. I plan to add some LEDs.. 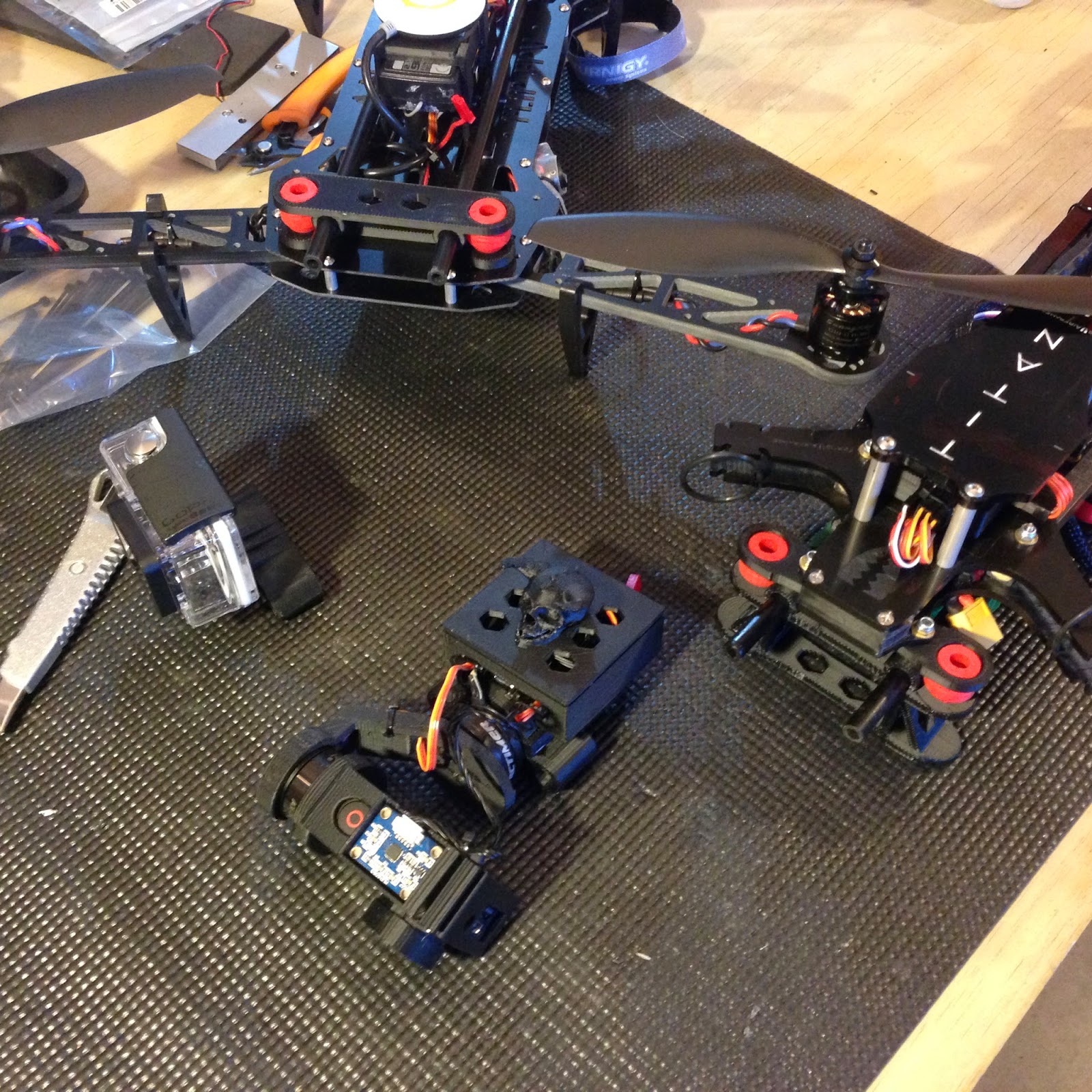 Now the proof is in the pudding. The video below show the video taken. This was also taken with brand new props on, that were not balanced.

Over all very happy with the outcome. I now have a reliable camera ship, now I can focus on getting some cool video.
Posted by Pete
Email ThisBlogThis!Share to TwitterShare to FacebookShare to Pinterest
Newer Post Older Post Home