The QBrain ESC showed up a couple of days ago so I went ahead and started to figure out the mounting for the VTail quadcopter. The QBrain is not a square and is a little larger than the kk2 board so it makes it a little tricky to fit. 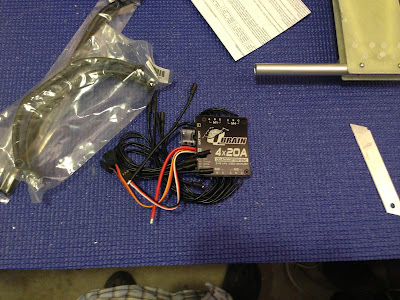 After numerous tries, both with a single plate, with the QBrain on the same layer as the booms and on a separate layer. I finally decided on having it on a separate lay for this build.  It gives me more room to play with, however on the next build... (yes there will be another build taking all my learning from this one) I will aim to reduce the build by one layer.

The Qbrain in its new home. you can see its a tight fit around the nylon spacers. 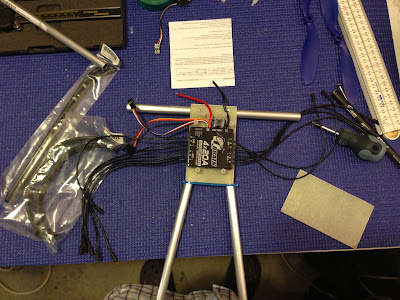 Building up the build layers, and mocking up the landing gear 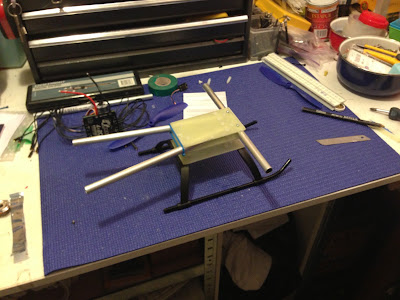 Additional holes cut on to the plates to mount the bottom plate that will hold the landing gear and QBrain. 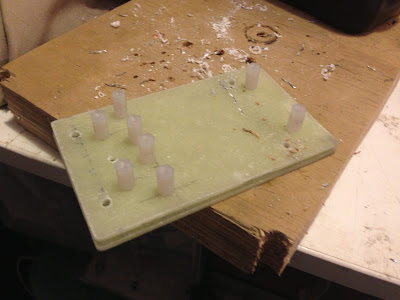 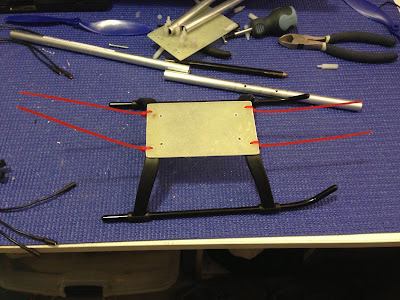 Hard to see, but the bottom plate screwed together with nylon standoffs and nylon screws. You can also see the QBrain double-sided taped to the base plate. The double sided tape I used is automotive trim tape. 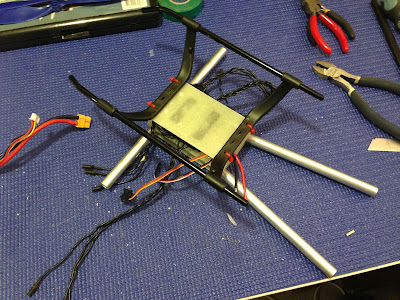 The frame complete, now waiting on motor mounts and motors. 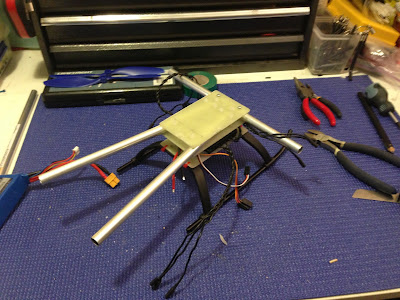 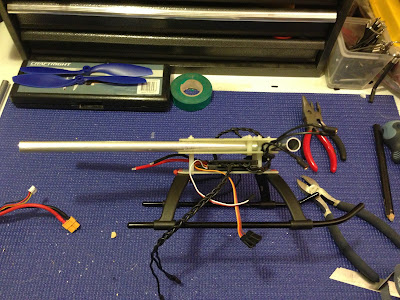 After crashing the 330mm quadcopter I finally went out and got some foam balls and practice golf balls to provide some extra protection from crashes.

I just cut a slot in the foam balls and pushed them onto the feet on the bottom of the arms. 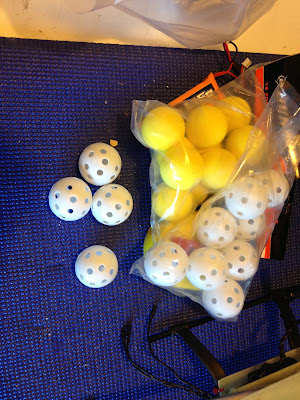 I then used some 6mm wooden dowel and hot glued the practice balls on to give extra landing protection. This also allows easier skimming on the ground when Im practicing flying in different orientations. 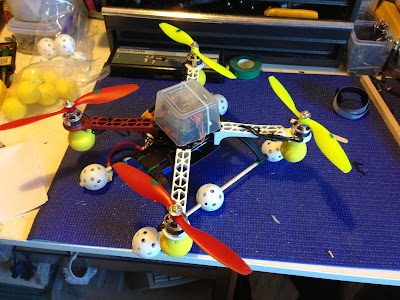 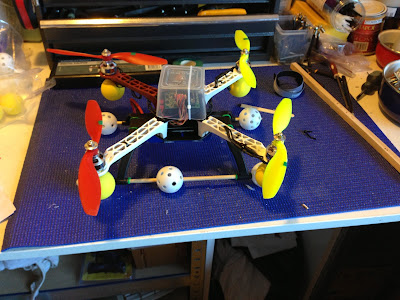 So in my previous post I stated I was pretty happy with the HK 330 Frames. Will I am still but not as much as I was.  They just break to bloody easily ...!!

The first arm broke after I missed an outdoor table thats only 300mm high onto the deck, SNAP went one of the red arms. The next one was when I hit a pole and the fall was admittedly a little higher 500mm, SNAP ..... grrrrr

Then things started to go weird.

I noticed that the transmitter and receiver sometimes took a little bit of fiddling to bind, I just though it was the power cycle on the receiver as I changed batteries. I didn't think much of it.

So I was out flying the Quad and something gliched, and it did a complete nosedived. WTF......
I knew it wasn't me... as I know when its me that causes the crashes as I have plenty of experience :)

This resulted in another arm broken in three places, broken props ... and due to the crash and the bullet connectors no popping a motor was also wreaked and it broke an internal wire. Grrrr

But that was the most annoying part of the weekend.

The crash appears to be due to the fact that the Orange DRX DSM module has malfunctioned.  I am not able to get it to bind to any of the three orange receivers I have. It powers on and I can put it into bind mode ... but cant bind to any receivers  Even a brand new one, to eliminate the possiabity of damage due to the crash.

So not sure whats gone wrong with it ... I have checked the forums and have not found much information any fixes. But on the HK website in the discussion area there are many reports of DOA units, but not of it working for a couple of weeks then failing. But after ready the threads Im very reluctant to order another one.

So I had to revert back to the 9XV8 module and receiver.  Thats when i found out I had also stuffed a motor in the crash.

Displeased  I was !! (Said with a Yoda voice) 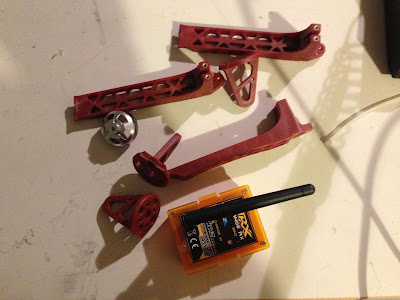 Overall the weekend was expensive ..... 3 x 330 arms, a motor and a OrangeDSM module.
I was lucky to have the spare parts to enable me to patch / repair and get back flying.

UPDATE :
After looking at my options I decided to get a Orange TX as I have 4 receivers and dont trust the module. This will give me two transmitters. I can use the OrangeTX for the parkfly stuff and I can build out the TX9 with a FrSky module for long range stuff when I get to that level of experience.