After the quick mockups with the new seat belt locations I needed to raise the fuel tank to give the extra clearance. I need to raise it about 25mm, I decided to make a completely separate subframe to mount the tank to, then mount the subframe to the chassis. 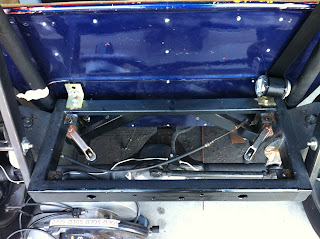 First job was to cut out the old mount tabs .... out with the trusty angle grinder. 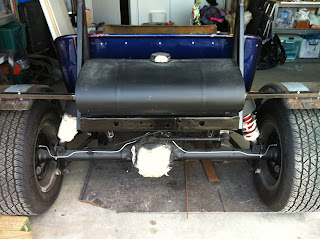 Subframe mocked up, and sitting in the chassis. That is all I had time to complete. The plan is to get the subframe mounts completed and get it mounted in the chassis, still considering adding rubber mounts. Once that is complete mount the fuel tanl to the subframe. 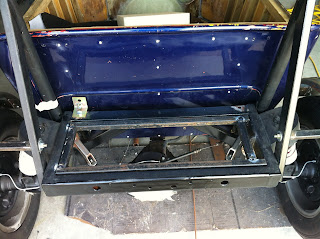 Posted by Pete
Email ThisBlogThis!Share to TwitterShare to FacebookShare to Pinterest

Just starting to do a quick mockups of all the guards on to decide if I need to change them ... Actually after all the work on the rears Im not as happy with them as I was. 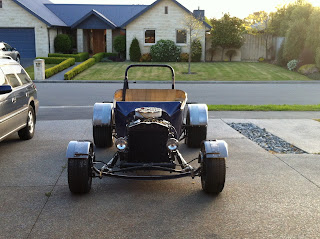 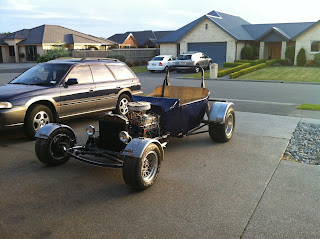 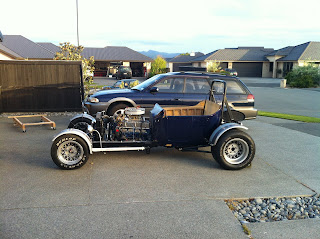 The rear guards, despite my efforts will still need some triangulation to give them extra strength. I think that I will either add the extra mount down to the bottom roll bar mount or add a completely new point... still deciding. 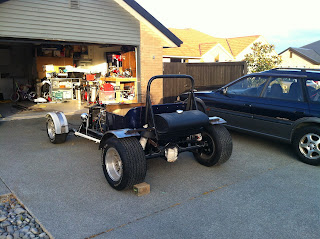 Posted by Pete
Email ThisBlogThis!Share to TwitterShare to FacebookShare to Pinterest

The next part for the guards is to weld on the mounting strip that the fiberglass guards will be mounted to. I wanted to try and have them match with the style of the rear guards with the srtip down the middle. I thought that this will also give the front guards a lot of extra strength. 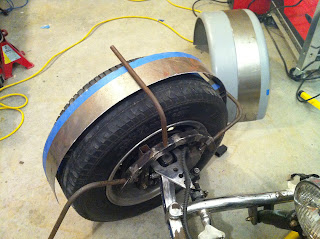 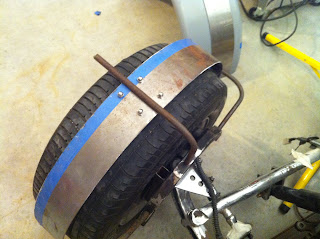 The first tack welds on holding the steel strip in place. 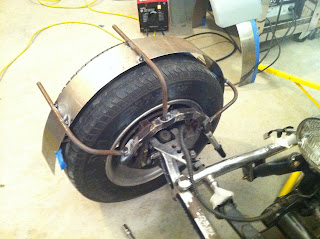 A quick test fit of the fiberglass guard to make sure everything was still correct. 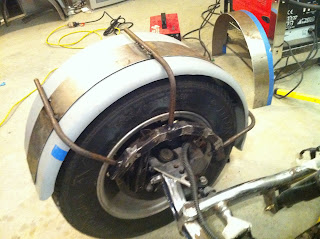 Repeat the process for the right hand side guard 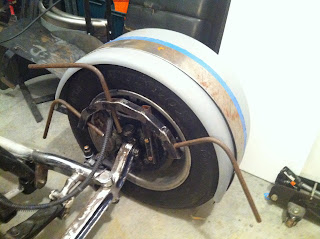 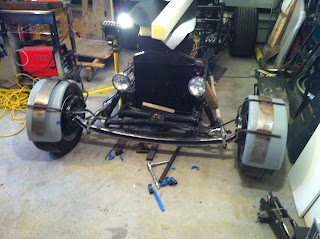 The next step was to mount the fiberglass guards in place to work through the final position and make sure that on full lock they cleared the radius arms. Below is all the mounting nuts and bolts. 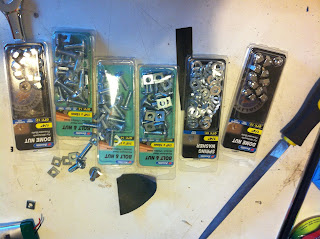 First guard bolted on. even with only then three bolts it felt strong and sturdy. 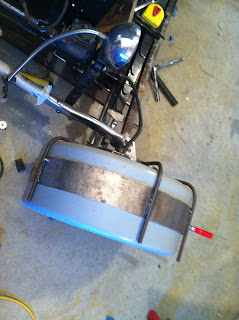 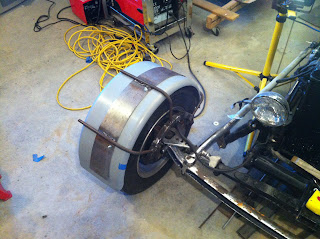 Both guards now temporarily bolted. The red line is where the fronts will be trimmed off at. 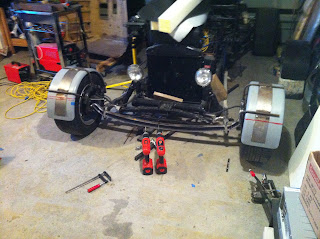 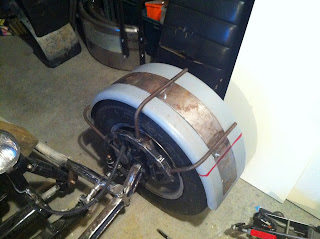 The temp guards ready for tidy up, grinding and the trimming of the fiberglass guards. 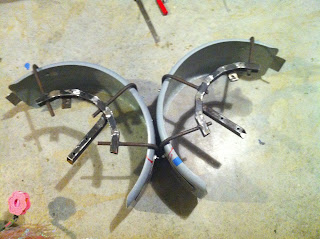 A breezy Saturday morning and time to start the grinding and tidy up of the guards. The mounting rods were trimmed and the bases re-welded to the mounts for extra strength. The steel band was also trimmed to the red line market out earlier. All other welds were cleaned up. 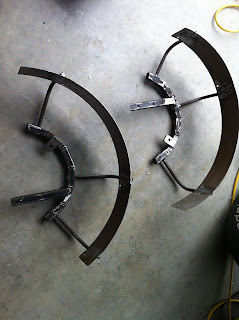 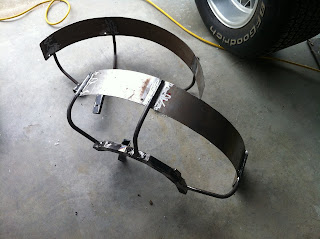 After all grinding and tidy up was done I needed to finish the mounting of the fiberglass guards. Fiberglass is known to crack and break if there is to many pressure points. So to try and avoid this I used cutoffs from the steel guards to create large flat backing plates the the fiberglass guards would be sandwiched between. 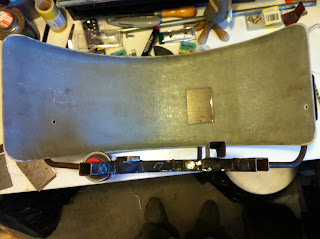 After a little mucking around and lost of drilling here is the completed back plates of one guard. 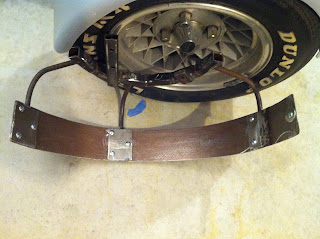 A happy weird welder that I found in the garage ..... no relation to Wallace 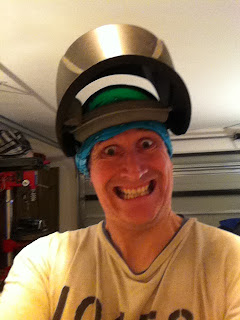 After a full mock up of the guards were done I welded the bolts to the back mount plates. This is make it easier to mount and tight if required, and if any nuts did come loose the bolt wont rattle or drop out. 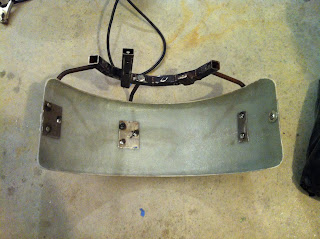 Final mock up of the guard mounted. 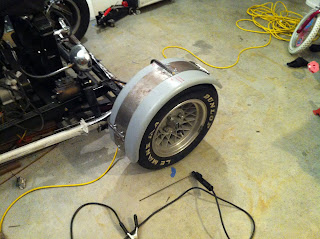 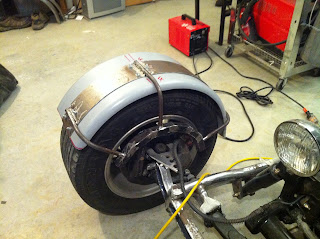 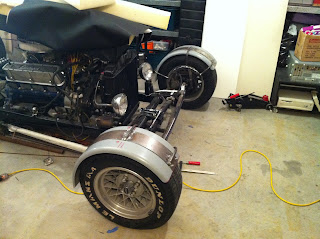 I discovered an issue after it was all complete that guards visually look a little wide and over hang to the out side of the tire, its not centered as it had looked during mock ups. But I was thinking of getting a wide combo anyway so with extra width it will allow for that future plan, and hopefully they wont be on for long as its just for certification until I get my fender exemption. But it still bugs me a little, I can use spacers on the mounts to make them more center. Hopefully once fully painted it will be less pronounced. 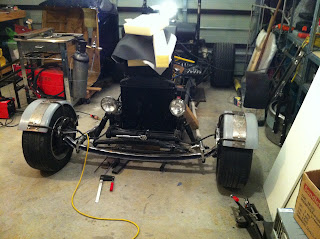