In one of my many orders that are yet to arrive from HobbyKing there is a OrangeRX DSM module to fit in to the Turnigy 9X. This will give me the ability to use a wider range of receivers and I have already ordered a couple of OrangeRX 615, which are much smaller and lighter than the 9Xv2 8Ch that comes with and can only bid to the 9x.

I didn't want to waste the module and I was going to have to do something with the antenna as it had to be removed to allow the new module to fit. For whatever reason the antenna on the 9X is hard wired to the RF module, so you cant remove it with out cutting the wire or desoldering.

After searching the web a popular hack is to convert the 9X module into a removable one. There are many ways people have achieved this. I wanted to do it with out spending any more $$ and make it look as tidy as possible.


My stock 9X before I start my hacking 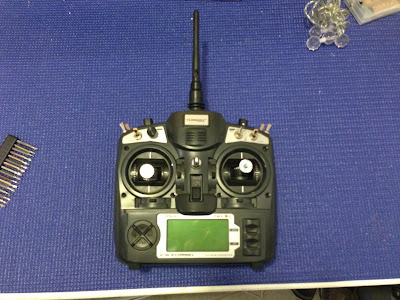 Remove the module face plate, two phillips screws and pull out the module. You can see the antenna lead solder to the module in the top left corner. 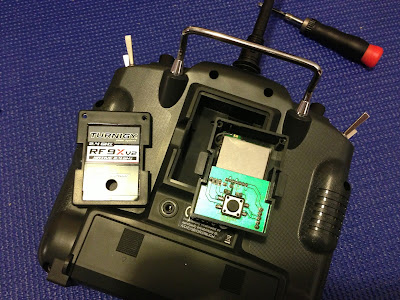 Using my new and fantastic soldering iron desolder and remove the antenna wires. On my module the circuit board wasn't even glued it so was very easy to pop out. 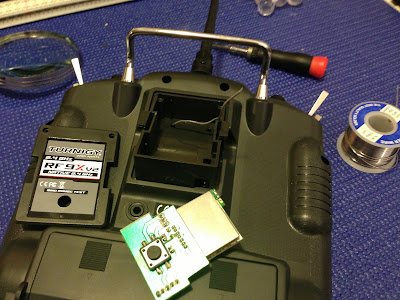 Next you have to split the transmitter, looks worse that it really is, remove the 6 phillips screws around the edge, carefully pull apart. There is a large molex connector holding the two halved together. Carefully unplug, you now have two separated halves. 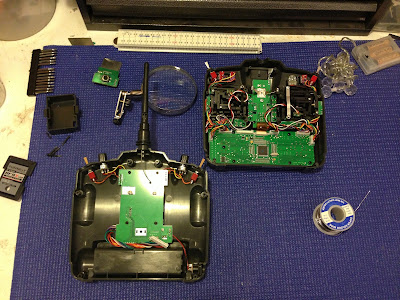 There is one phillips screw holding in the antenna, remove and the antenna should pull out. 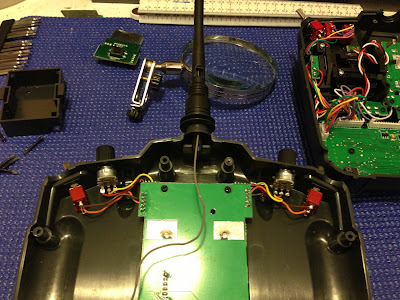 My now naked antenna-less 9x transmitter back together again. 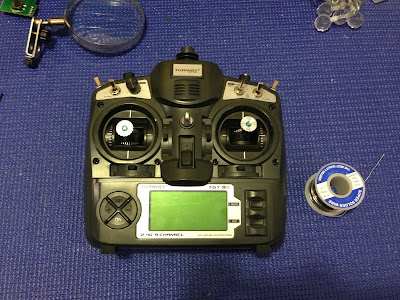 Here is the antenna completely pulled apart. After some mock ups I found that it would be best for me to just make a hole in the back plate and hot glue the pig tail antenna directly in. I didn't want to cut or destroy anything more than necessary, just encase I wanted to convert it back to stock. 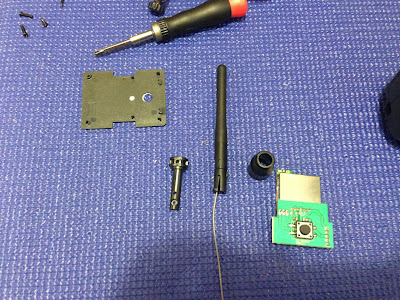 I measured the hole I was going to need to drill, I only had a 10mm drill, not a 9.5mm so it was a little oversize. 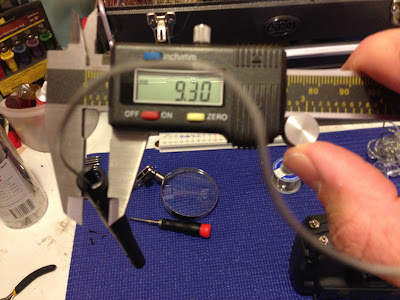 I marked where the needed to be, making sure that it would fit and was well away from the module walls. I used a small file to cut a key way to match the one on the bottom of the antenna. However after doing test fits, this wasn't needed as I glued the antenna further out that first though and the keyway was outside the housing. 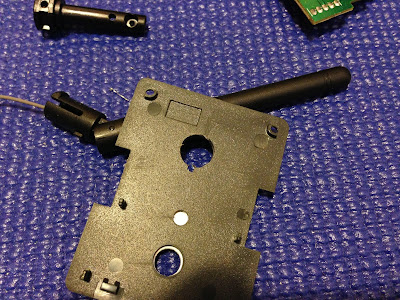 Test fits complete, making sure it all fitted and didn't hit anything. I taped it in position and hot glued the antenna on place. 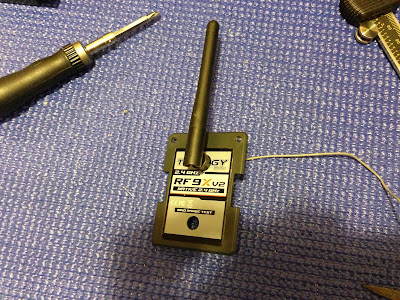 Completed hot-gluing, the antenna is now very securely attached to the module back place. 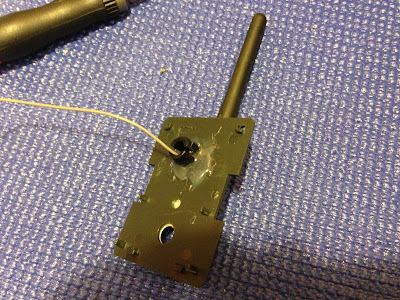 The next tricky part was to re-solder the antenna coaxial wire to the RF module. I trimmed back the top layer to give me some more space to solder. After a bit of fiddling and using an old man magnifying glass I made two successful solders. 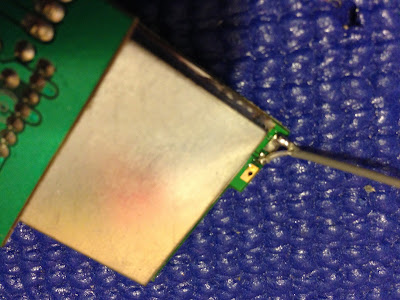 Module already to get screwed back together and tested. 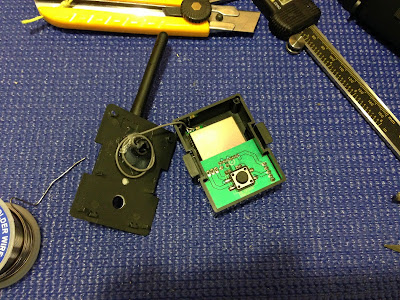 My modified module complete, looks like a bought one :) 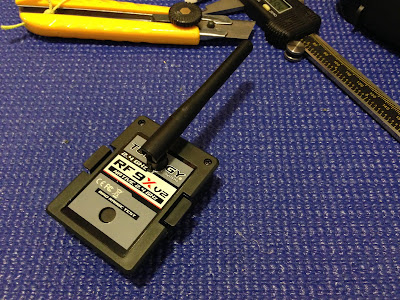 Module plugged back into the transmitter 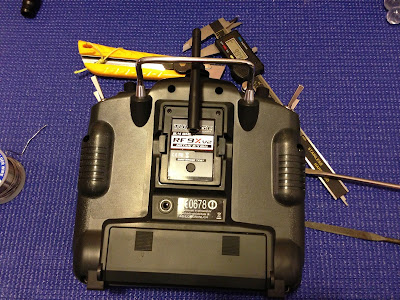 The left over antenna parts that will be kept so I can convert back if required. 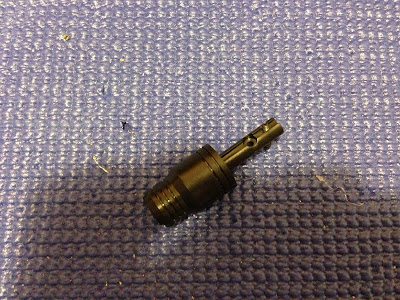 With the antenna and mount removed from the top to the transmitter I had a big hole for dust, water to get into. So after hunting the house for something to cover the hole I found this small soccer ball. So I hot glued it in the hole. Its temporary until I find something better. 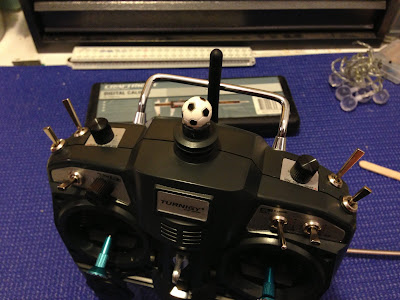 I am very happy with the results. This module and its receiver is planned to be setup with the 9-1wireless training kit I got from Hobbyking. 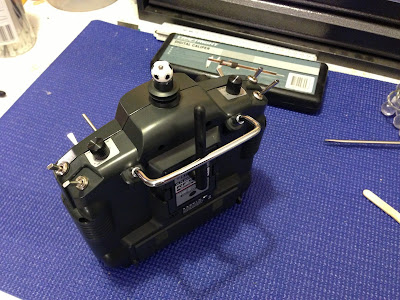