Well, have been putting in some energy into the RattyT, I am able to find time in the evenings and limited time on the weekend. Weekends are 1-2hr tops, I save that time for loud tasks like grinding / cutting. Everything else that is done during the evening and all done by had, to reduce noise and not wake kids. Getting pretty darn handy with a hacksaw!!!

The joys of an attached garage. So the next big thing I need to do is the fenders.
Not that I want too as I want to run fender-less, but to get certification I need fenders. And since I'm currently not a hotrod club member I cant get a fender exemption, I need to be a club member for at least a year.

Once I get the old girl on the road Ill join a club then.

So onto the fenders, after a lot of thought and consideration I finally decided to mount the rear fenders to the chassis. I know that I cant get them as close as I would like but wanted to have them easily removable and there wasn't any good mount points off the diff for the weight of the fenders. 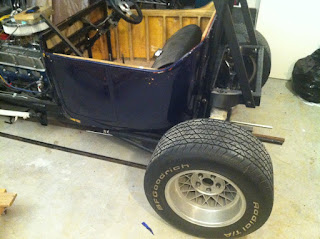 I had purchased a while back some mild steel fenders off Trademe. They were cheap and were the right radius. They were full half's, if not a little over, however they were not wide enough, but I have a plan. 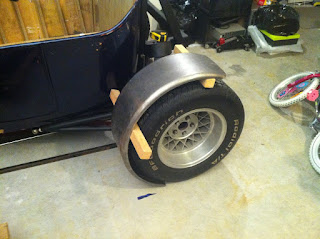 So after a lot of mucking about and figuring out how I was going to mount them I finally was able to start.  I had to make sure that they were going to high enough not to rub when the suspension was fully loaded, I only have about 60-70mm travel before the bumbstops hit, so I worked with that. 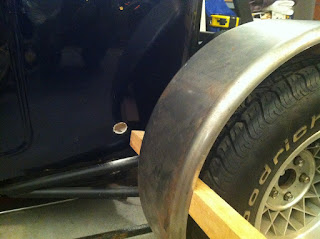 First job was to after all the mocking up drill a hole through the body so that I will be able to bolt the mount through the floor and to the chassis. 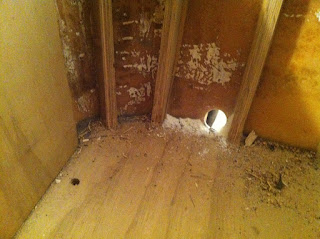 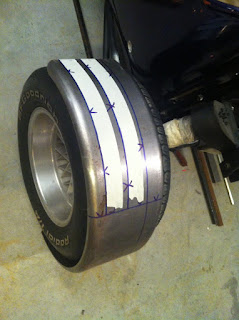 Next up was to widen the fenders and cut them to length. I got them all marked put ready for cutting on the weekend. 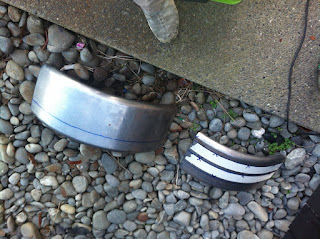 Fortunately the weather was kind and I was able to get out and start cutting the fenders up. A lot of noisy grinding later and the fenders were all cut.... only made two mistakes ... but fixable ones.. phew!! 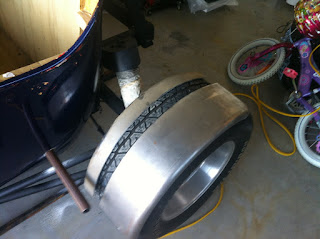 The pieces cut and showing the gap. 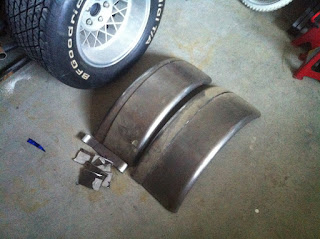 All cut ready for welding up 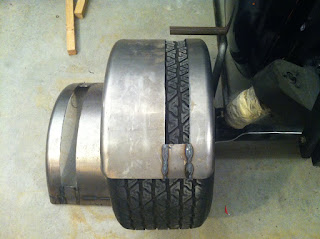 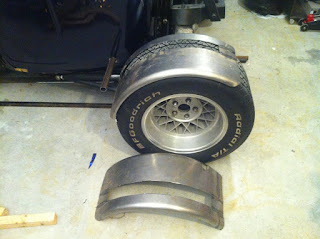 So the next free evening was spent welding the fenders back together. It didn't take too long. Was pretty happy with the welds too, considering its been a while since using the MIG. 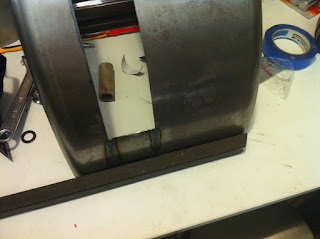 Next task was to make the mounts, I tried different tubing that I had and finally chose the box section. Not super pretty but very functional.  And I have a heap of it. I had to keep reminding myself that this was only until i get my fender exemption. 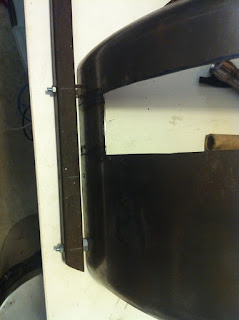 The mount mocked up, I wanted to have the spacers as a detail. I will get proper tubing later on, but for now a few spare nuts will do. 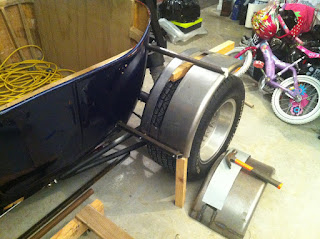 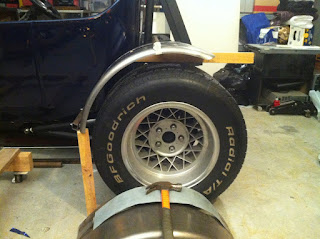 That was it for now.
Spent a lot of time trying to figure out how and where to do the top mounts. Still a work in progress.
Posted by Pete
Email ThisBlogThis!Share to TwitterShare to FacebookShare to Pinterest
Newer Post Older Post Home