After a "few" weeks away from the project I was able to spend some time on it over the last couple of days. Standing back and looking at the rear guard mounts I decided that I needed to add more strength. After a bit of thinking and trying different options I decided to triangulate down to the bottom roll bar mount.

Once again I had to do this all by hand and hacksaw. The first part required was and angle mount for the bottom mount point. This was done using 50mm angle iron. Once cut and drilled I bolted it to the chassis to start on the tricky up stay. This was not easy as there were no straight angles.

First cut was for the angle off the newly bolted on bottom mount. This was cut at an angle so that the up stay was as close to the guard as possible. 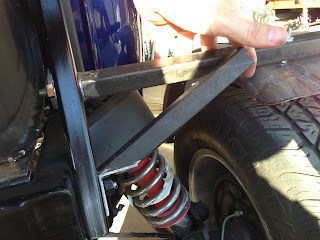 With that cut done, the real tricky bit was to try get cut the top cutaway. As it had to be at the right angle and also be a V to slot on the the angle of the existing mount. After a lot of hacksawing and filling I finally had the cut ready for welding. All I had to do now was repeat on the other side..... 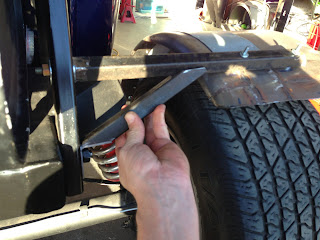 The two finished mounts, all welded ready for grinding and a coat of paint. 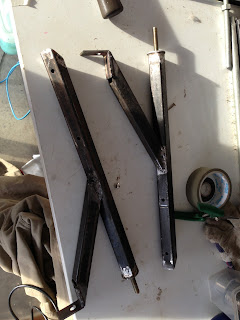 Well after a bit of negotiating I was allowed in the garage for a good segment of time. The plan was to wire brush and grind as much as I could to get ready for some painting. That was the intention, but I took the opportunity to finish off the fuel tank subframe.
Removed Mounts and subframes that needed wire brushing. 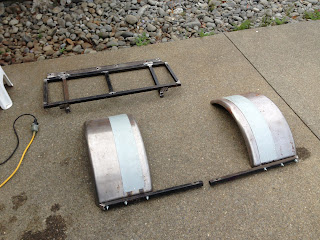 The bulk of the subframe and mounts for the fuel tank were complete. I finished drilling the remaining holes to bolt the tank to the subframe, This was needed as I had to repair and straighten the mounts on the fuel tank. 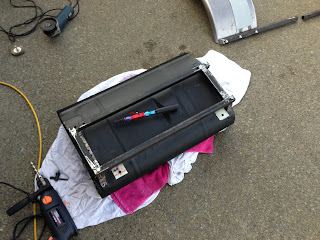 I had previously purchased rubber stoppers to go between the subframe and the chassis. These were fitted. I could now see the final height of the tank and subframe when on the chassis. 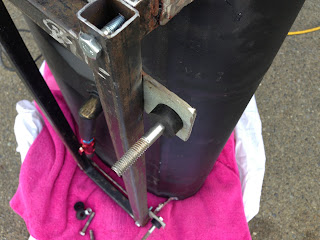 Here it is all mounted up. 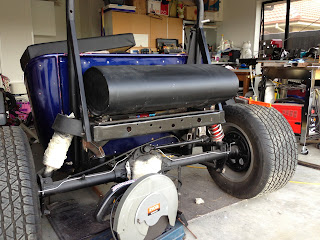 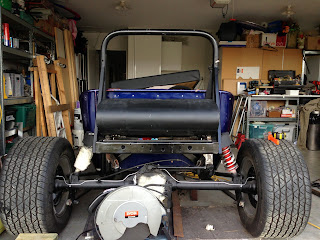 Now that I was happy with how it all fitted up, I needed to put some cosmetic skins on to cover the subframe and also the fuel tank tap. First up was the sides. After some initial drawing and battling with the tinsnips I had my first side done. 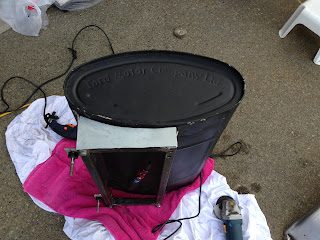 After tack welding it in-place a test fit was done. I must have taken that tank on and off over 50times. Once happy with the fit, rinse and repeat for the other-side. More trial and error and a little use of the hammer both side plates were fully welded to the subframe. 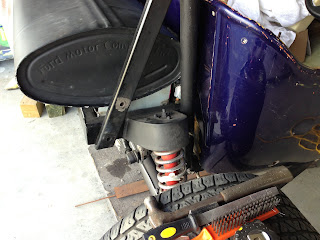 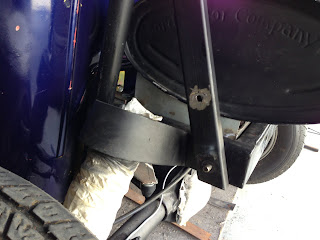 After I had finished the sides, It became obvious that I needed to also cover the gap created between  the tank and the chassis at the rear. So after battling the sheet metal nibbler I had two strips 30mm wide that were used to create the skin for the gap at the rear. This was welded to the side skins and a spacer was welded in the middle. ( I forgot to get photos) Now the tank and subframe look like one unit and visually clean and tidy enough for the RattyT. 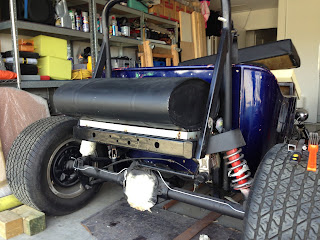 After some wire brushing the first coat of Hammerlite was applied. That was it for the weekend. 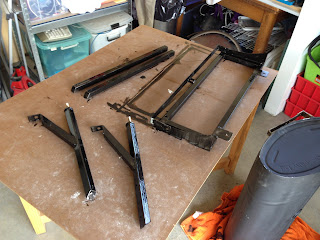