What to do with lots of spare drive of all sizes, a couple of old Compaq slimline pIIIs. I had to find some use for them so I come up with a little project, a NAS server. I decided to play with FreeNAS, FreeNAS is a small, powerful, full-featured implementation of FreeBSD (Based  BSD Unix) as a network-attached storage device.

I download created the live CD which allows you to install on to a USB fob. I created the bootable USB fob and got the below system up and running. Which by the way was a DC who's main OS drive died. So after I had a play and though yeah this will be useful I needed to find a permanent home for a FreeNAS install.

I finished rebuilding the below PC I needed to get the data back off the other drives, It is also used to host a couple of VMs, like my old blog (hence the side link isn't working) So I hopefully I will have that back up and running in the next couple of days. But back to my other little project. 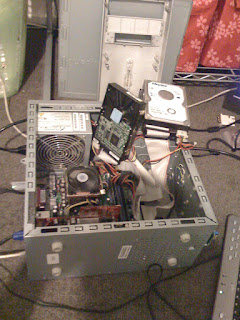 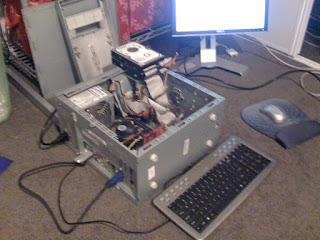 The first hurdle I needed to address was that the old PIIIs would not boot from a USB fob, and they didn't have a CD drive. So after some searching on Trademe I found the perfect solution. The first part to this solution was the USB CF card reader, I could create, install and fiddle with the CF card all from my XP VM from inside of MAC OSX. With this I was able to do the install from the live FreeNAS CD, and test the bootiung off the CF card. The next more common item was the CF to IDE adapter (Once again TradeMe), this allows a CF card to be treated as a normal IDE harddrive.

So after I had confirmed that the CF card booted on the VM image I installed it as the first IDE drive in the Compag PIII3 and switched it on. I worked like a charm. The old PC treat the CF/IDE as a bootable harddrive and FreeNAS started up and I had a functioning FreeNAS server.

I then added a couple of drives and set about configuring FreeNAS. 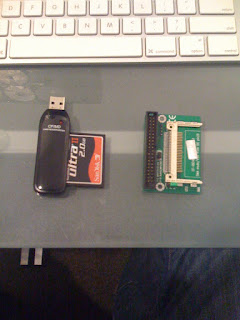 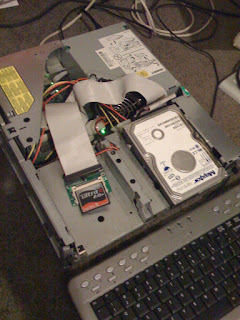 CFtoIDE adpater and harddrives in the old PIII

Now it took me a while to get my head around FreeNAS, its simple once you know how . So heres the basics.

Once you have configured the IP address and have it on the network (all done via the physical interface, keyboard screen) you then use the web admin interface to do everything else.

Once logged in you have to configure the drives. The steps to do this are,

Add the disks, this makes FreeNAS aware of the drives,

Confgiure either AFP or CIFS/SMB to access the FreeNAS across the nextwork this is done by enabling the service. Once that is done you then create shares to the data you want available.

I spent lots of time play with the options and plan to add another drive to look at the software RAID5 features. But so far very impressed with the easy of use and capabilities. 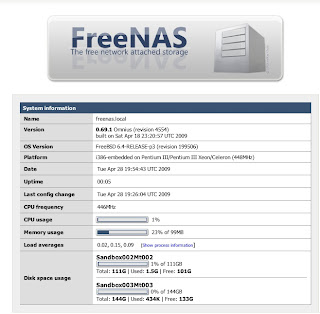 So if you have an old PC lying around and some drive a little spare time go make a cheap storage solution.